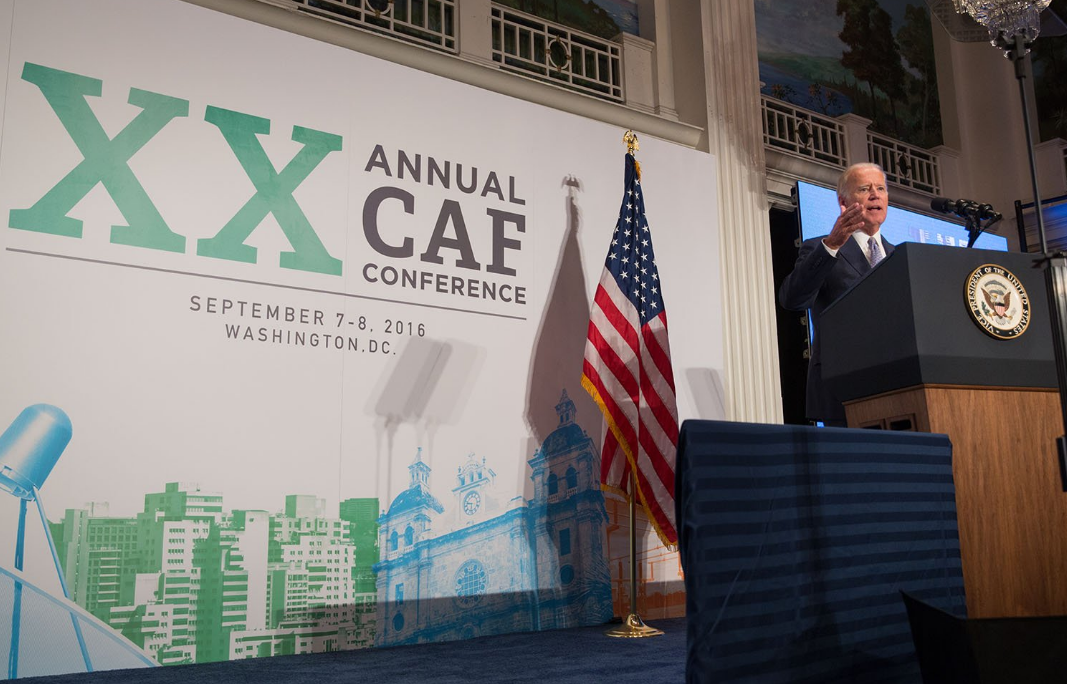 THE VICE PRESIDENT:  Sorry to disappoint you.  (Laughter.)

Many of you in this room have been — had the opportunity to be introduced by and given nice introductions by your presenters.  And a lot of it is boilerplate.  But I must tell you — I mean this sincerely — the meaningfulness of the introduction is in direct proportion to the respect you have for the person introducing you.  And it means a great deal to me.

Secretary/Ambassador Carla Hills and I go back a long way.  And we were — I was a leader in the Senate, and she was a leader in a Republican administration.  And she was one of the most formidable minds I ever found myself disagreeing with on specific policy and domestic policy at the time.  (Laughter.)

So I want to thank — I know she’s an ambassador.  But I think it’s a pretty big deal to be a Secretary too — former Secretary and Ambassador Carla Hills for her lovely introduction.

And, Enrique, Mr. President, I should say, I want to thank you for 25 years of distinguished service to CAF.  Your leadership has helped make CAF, and I mean it sincerely, one of the most respected and effective institutions advancing Latin American development.  And you will be missed, but I imagine you’re not going to miss it all.  It’s a lot of work.  But thank you for all you’ve done.

And Luis is not here, the Secretary General, because he had a death in the family.  But I also think he’s doing an incredible job.  And I send my sympathies and hope he’s well.

And, Michael Shifter, the Inter-American Dialogue President — that’s a fancy foreign policy term for saying you actually get people talking to one another.  And it matters.  And I also want to thank, as I said, Carla again for that introduction.

And in that time, thanks in part to the leadership of the people assembled in this room, we’ve witnessed a significant sea change in the region.  The prospects for unlocking enormous potential that exists in our hemisphere are fundamentally different today than they were 20 even 10 years ago — or even five years ago.

For the first time in history, in my view, it’s possible to imagine a hemisphere that is middle-class, democratic, and secure from northern Canada to the tip of Chile.

And it’s going to take a lot of hard work, a lot of sustained commitment from all the countries in the hemisphere, including the United States, to get that done.  But I really believe it is possible.  As my grandfather would say, with the grace of God and the good will of the neighbors, we’ve got a chance to do something that could only be dreamed of even five to 10 years ago.

Because we have everything we need to lead the world in the future.  There is no reason why the Western Hemisphere in the 21st century won’t be the most consequential hemisphere in the world.  I mean that sincerely.  We have the resources.  We possess the ingenuity, the values, and the dynamism.  All exist in this hemisphere.  It’s all here.

And President Obama and I recognized from the day we took office that there was a lot of history, a lot of baggage shaping our responsibilities and our relationships in the hemisphere.  So we made it clear at the outset we weren’t going to be bound by the mistakes of the past or trapped by outdated ideologies.

Our relationships would be grounded in mutual respect.  We no longer would ask:  What can the United States do for the region?

But:  What can we do with the region?

I’ve met with almost literally every President in the hemisphere.  And that’s the point I made clear from the beginning.  Again, it’s not about what we can do for you.  It’s about what we can do with you.  And it has to be based upon a respect that is across the board and sometimes has been lacking in the past 150 years.

No region of the world is of greater consequence to the security and prosperity of the United States than the hemisphere.  It’s in our self-interest to see our hemisphere reach its full potential.  That’s why we’ve made it a priority to increase our high-level economic cooperation and boost our trading relationships throughout the region.  Nearly half of our exports — $670 billion annually — go to countries in the hemisphere.

To see all of the remarks, please go to the White House official website.