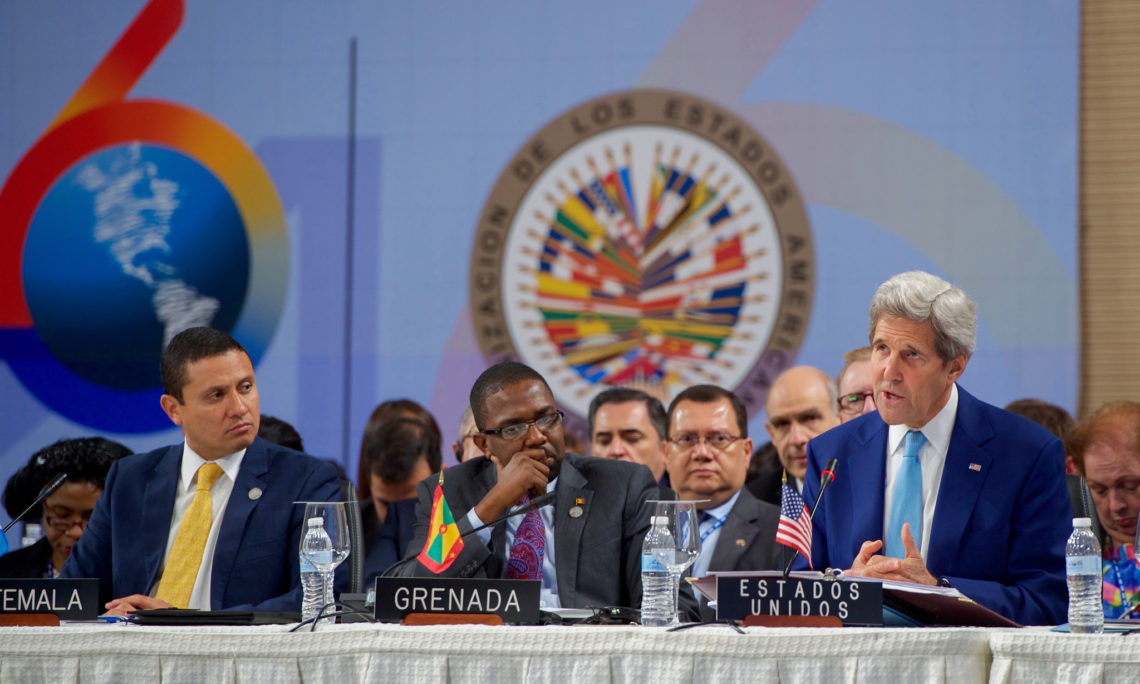 SECRETARY KERRY:  Good morning, buenos dias.  Mr. President, thank you for your consideration and I thank all my colleagues for their understanding.  I have to step out to do a video conference with the President and others, and I appreciate your understanding.

Let me begin by thanking our hosts, President Medina of the Dominican Republic and Foreign Minister Navarro, and I also thank Secretary-General Almagro and Assistant Secretary-General Mendez for their stewardship of this critical organization.

Let me just begin by saying that on behalf of the American people and President Obama, I want to begin by expressing my gratitude to all of you for the outpouring of support and condolences in the wake of the horrific attack in Orlando on Sunday.  Obviously, we are very saddened and many other emotions, I might add.  But we also feel an enormous sense of solidarity, both throughout our country and along with our partners in the international community, in the face of this kind of evil.  Together, we will redouble our commitment to ensure that the hate and the division that are characterized in these kinds of attacks are ultimately defeated by compassion and by inclusion.

Today, I’m personally pleased to return to the OAS, and on behalf of President Obama, underscore to all of you how deeply the United States values the partnerships that we have forged throughout this hemisphere.  It’s in large measure because of the relationships that we share in recent years that the Americas have stood in sharp contrast to more troubled and conflict-ridden regions of the world.  Largely, the Americas have become more peaceful, more prosperous, and I am particularly encouraged by the theme of this year’s conference – sustainable development – and the fact that this General Assembly will approve the Inter-American Program for Sustainable Development, which will jumpstart our region’s implementation of the UN 2030 Agenda.

Now, in December, a number of us here had the privilege of being in Paris, where nearly 200 nations, including every state in the Western Hemisphere, came together around the most ambitious global climate change accord ever negotiated.  The Paris agreement sends a crystal-clear signal to the world marketplace that our collective future will be and must be powered by clean energy.  As we have learned, clean energy is not only the solution to climate change; it happens to also present us with one of the greatest economic opportunities in history.  The clean energy/alternative energy/renewable energy market is the largest market ever conceived of by human beings.  And that is particularly true in many of our nations individually, which are blessed with incredible capacity for harnessing renewable energy from the abundant sunshine and from the windy coasts.

The United States is deeply committed to working with all of you to promote sustainable growth and to create safe and prosperous communities for all of the people in the Americas.  But we recognize that this will only be possible if we continue to uphold the fundamental pillars that this organization stands for – human rights, good governance, security, development, democracy.  And that is why the Inter-American Democratic Charter should remain our compass.

In adopting that charter 15 years ago, our governments made a solemn commitment to pursue liberty and social justice, and to ensure that our citizens would be able to realize their aspirations for democracy.  The OAS continues to play a critical role throughout the hemisphere – for example, in brokering the peaceful resolution of disputes.  As Colombia approaches the end of the hemisphere’s longest-running armed conflict, the OAS mission to support the peace process remains essential.  And today, I’m pleased to announce a new U.S. contribution of $800,000 to support that OAS mission’s important work.

Today, civil society across the Americas is increasingly vibrant, increasingly it is an engaged partner in amplifying the voices of the governed and weaving an inclusive social fabric.  And it is, after all, what all of us are supposed to be doing – representing the governed.  However, we’re very disappointed in the decision to exclude civil society from these proceedings.  Transparency and citizen participation are, frankly, not optional within democracies, and they are not prerogatives of only a host government.  Last year in Panama, President Obama underscored the support of my government for establishing a permanent, public, consultative role for civil society in future Summits of the Americas.  And we hope that the nations in this room will lend their support to this important ingredient of the democratic process.

Protecting and advancing human rights remains a top priority as well.  Many of our own nations, including my own, are redoubling our commitment to the Inter-American Commission on Human Rights.  In 2013, this assembly agreed to seek full financing for the commission’s operations and rapporteurs, and we all have a responsibility to both make good on that commitment and do all that we can to facilitate its critical work.  For our part, the United States welcomed the productive site visits by the commission to Florida, Louisiana, and Missouri as part of its review on race and the criminal justice system.

Our hemisphere is also seeing encouraging trends with respect to transparency and accountability.  More and more citizens are saying spontaneously, “No mas” to corruption within their governments, and are working to increase openness, expose abuses, and hold leaders to a higher standard.  And we have seen the impact in many different places in the world in the last few years of corruption that steals the future from people in their own country.

With these positive examples in mind, we remain strongly committed to working with all OAS member-states in order to remedy the deeply troubling situation in Venezuela.  Like all people of the Americas, Venezuelans have the right to use constitutional mechanisms to express their will in a peaceful and a democratic manner.  The United States joins with Secretary General Almagro and others in the international community in calling on the Venezuelan Government to release political prisoners, to respect freedom of expression and assembly, to alleviate shortages of food and medicine, and to honor its own constitutional mechanisms, including a fair and timely recall referendum that is part of that constitutional process.  The secretary general’s invocation of Article 20 of the Inter-American Democratic Charter will open a much-needed discussion about Venezuela within this organization’s permanent council, and we stand ready to participate in that discussion, and along with our OAS partners, help facilitate that national dialogue that will ultimately address the political, economic, social and humanitarian dimensions of this crisis.  I emphasize the humanitarian dimensions.  Just this morning, we learned of people who are dying in a food line, or waiting to get medical help that they need.

Let me take this opportunity to underscore also another area of concern for all of us.  The men and women of Haiti deserve the chance to express their will and elect a president without further delay.  It is time for Haiti to move forward so it can focus on addressing the significant challenges that are facing its people today.

Despite the tests of our hemisphere, there is no question that the shared democratic trajectory of the Americas remains a vivid example for other regions of the world.  Every day, we are proving that diversity is strength, that inclusion works, that justice can overcome impunity, and that protecting the human rights of persons regardless of race, gender, sexual orientation, gender identity, or political opinion is a hallmark of a genuine democracy.  And what happened in Orlando on Sunday only reinforces the need for us to expand and enhance our cooperation in the global fight against terror and hate.

Early on in my tenure as Secretary of State, I had the privilege of going to the Organization of American States in Washington to underscore the value of inclusiveness and regional cooperation for peace and democracy.  I didn’t choose that setting arbitrarily.  I chose it because the United States recognizes the irreplaceable role that this body plays on issues of shared security, human rights, democracy, and sustainable development.

The OAS, my friends, matters.  And member-states share a responsibility to guarantee that it endures well into the future.  That means doing what we can to repair the organization’s financial health.  It means complying with our treaty obligations.  And for those in arrears, it does also mean paying those arrears as soon as possible – and we recognize there are sometimes difficulties in doing that, but it is important, over time, that we all make good on our responsibility.

Ultimately, that means developing a long-term budget plan that will help us to prioritize and achieve our collective objectives.  What I said a few years ago in Washington remains true today:  La union hace la fuerza.  In unity there is strength.  We continue to believe that supporting a vibrant, active, and unified OAS is central to promoting a peaceful, prosperous, and inclusive hemisphere.  And today, I reaffirm the United States’ deep commitment to working with all of you in a spirit of genuine and equal partnership so that together we can build the future that we all seek.  Thank you,Senor Presidente.  (Applause.)