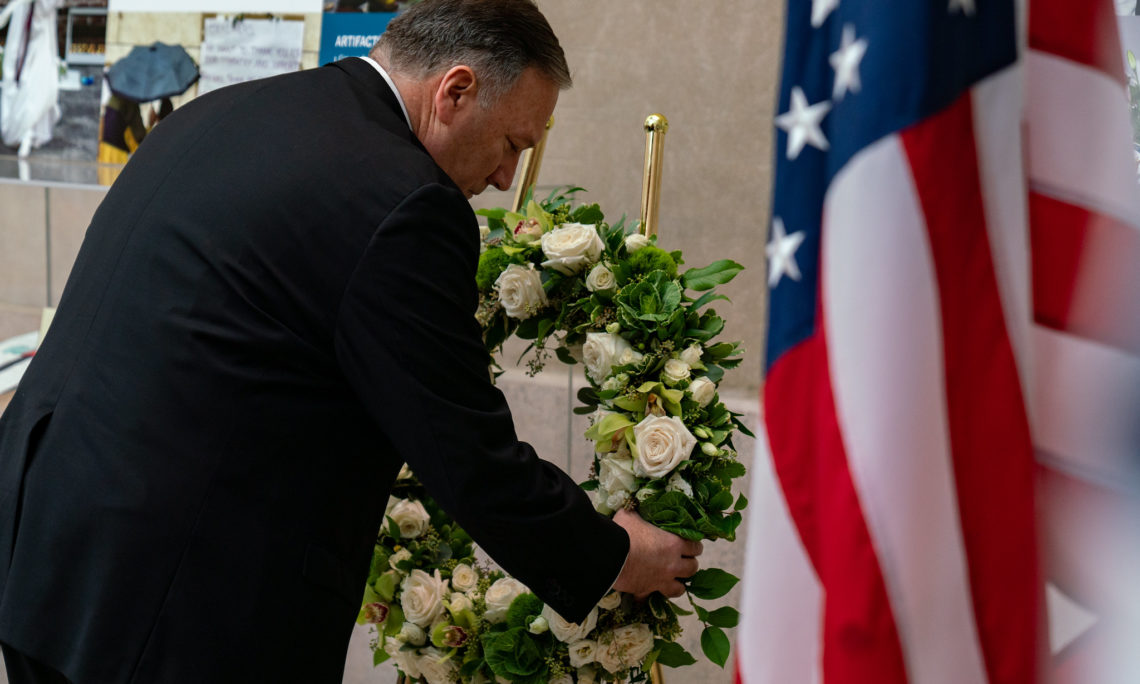 SECRETARY POMPEO:  Good morning.  I’m very proud to remember this day with my State Department family.  As Abraham Lincoln once said, that the “silent artillery of time” erodes the memory of important things.  So I’m thankful you are all here to remember those for whom we lay this wreath, to remember a day in American history when the sting of affliction sank deep into the soul of our nation.

When spouses said goodbye for the last time as they left for work, when parents hugged their children for the last time before they boarded an airplane, when co-workers greeted one another for the last time as they started their day; on that day Americans mourned for those lost loved ones, the scars may never fully heal.  But we as a nation did not wallow.  We did not drown under the waves of suffering that radical Islamist terrorists unleashed on our country.  We came back strong.  And we at the State Department, alongside other federal agencies and our military, trained our righteous American vengeance on our enemies.

Nor should we forget what happened on September 11th, 2012.  On that night, in the early morning of September 12th, Ansar al-Sharia fighters and other American adversaries killed Ambassador Chris Stevens, Sean Smith, Glen Doherty, and Tyrone Woods during their assault on America’s post in Benghazi, Libya.

Today, one of the State Department’s most essential diplomatic missions remains protecting America from terrorists of all kinds.  This is certainly true in the Counterterrorism Bureau, and all others here play a significant role in that important mission.

The world knows that the United States is a nation of peace.  But you all have my word, so long as I am Secretary of State, driving America’s terrorist enemies to annihilation will be a top priority.

September 11th, too, revealed how many friends the United States has all around the world.  Just get a moment – take a moment to look at the exhibit in which we’re standing.  Each one of these items is from someone who told the American people that you are not alone in your pain.  See the booklet of drawings and the notes that students in Johannesburg, South Africa sent to the U.S. consulate there.  See the Canadian flag covered with handwritten messages addressed to “our American friends and neighbors.”  And see the “Dear Santa” letter from a child in Australia.  It says, quote, “I don’t want no toys.  I just want America to get better.”

On behalf of the United States, I am grateful for those who 18 years ago offered their love and support for our country.  And for us here today, may we honor the victims through the defense of our homeland.  May our lifelong remembrance comfort their families, and may our work, our diplomacy, uphold security and freedom.

(The wreath was laid.)