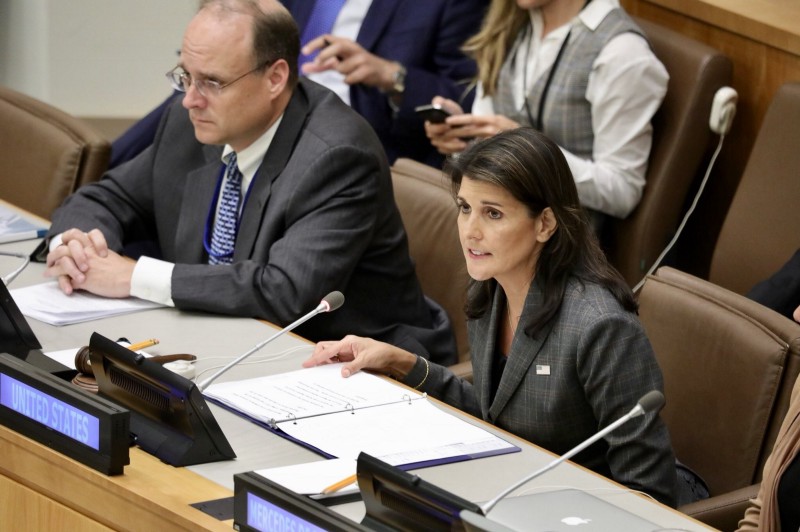 Thank you, Mercedes and Marshall, for bringing two different but equally important perspectives to our conversation. I thank everyone here for this special session on the instability, violence, and human misery that widespread corruption has unleashed in Venezuela.

At its core, corruption is the transfer of wealth from the powerless to the powerful. Bribes, insider deals, skimming of public funds, and diversion of humanitarian aid – these are all forms of the involuntary tribute the poorest pay to the powerful in corrupt regimes. When the weight of this burden becomes too much for the people to endure, they inevitably react.

Corruption also allows transnational crime and drug trafficking to flourish, threatening the health and safety of all of us. The resulting instability and outflows of desperate people demonstrate that corruption is not just an internal matter. It is a regional and global concern for all of us.

Nowhere is this more true than in Venezuela. Those who have stood on the Simon Bolivar Bridge that connects Venezuela and Colombia – as I have – have seen the endless parade of people fleeing poverty and oppression in Venezuela. You see the fathers and mothers crossing to Colombia to sell their last possessions in order to buy food and medicine for their families. You see professionals, whose salaries have been reduced to nothing by inflation, crossing to work in menial jobs. You see entire families crossing the bridge to beg on the other side. What strikes you the most when you watch the flood of humanity cross the bridge is how unnecessary it all is.

Venezuela was once a wealthy country. It has vast natural resources. Something is very wrong when citizens of an oil rich country have to leave in order to beg on Colombian streets to feed their children. That something is the corruption of the Maduro regime. This is a man-made crisis. Period.

It is really something to behold. Hugo Chavez’s perverse vision of a socialist paradise in Venezuela has transformed into a criminal narco-state that is robbing the Venezuelan people blind. I will leave it to history to judge whether this transformation was inevitable. But Venezuela’s descent from misguided socialism to brazenly stealing the peoples’ resources over the last two decades is undeniable.

First, domestic food production collapsed under the policies of Chavez and Maduro. And now Venezuela’s leaders are actually stealing from the government food distribution system they supposedly created to feed the people. The United States has designated sanctions for high-ranking government officials – including Maduro – who have engaged in embezzlement and price manipulation schemes in the government food program – schemes designed to line their own pockets.

One way regime officials profit from the hunger of the Venezuelan people is, as we heard, by substituting lower value products for more valuable items in the food program. They then sell the higher value items on the black market and pocket the difference. Another scheme is for government officials to overpay for food – to give $42 of the people’s money for $13 worth of food from a corrupt contractor. The officials and their cronies then keep the profit.

Corruption on the scale of Venezuela is a moral crime against the people. But it is also a matter of international peace and security. It’s worth taking a closer look at the Treasury Department’s recent designation of a top leader in the Venezuelan government to see the international reach of the Maduro regime’s corruption.

Diosdado Cabello has often been called the second most powerful man in Venezuela. He has moved in the highest levels of the Venezuelan government and military for two decades. Cabello was most recently the First-Vice President of the United Socialist Party of Venezuela – Maduro’s party. He is also a thief and a drug dealer.

In each of his government positions, Cabello has exploited his power to line his own pockets. Cabello has embezzled state funds. He was directly involved in narcotics trafficking, moving drug shipments from Venezuela, through the Dominican Republic, and into Europe. Cabello even used his contacts in government to obtain information about wealthy Venezuelans to help him identify other narcotics traffickers. He would then steal their drugs and eliminate his competition. Cabello laundered money he made from selling drugs and stealing from the Venezuelan people through the international financial system. He used front companies in Florida and state-owned mining and mineral companies in Venezuela to hide his dirty money – all while he served in the highest levels of the Venezuelan government. The end result of the corruption of Venezuelan officials like Mr. Cabello is that, not only do the people of Venezuela suffer, but the security of the entire hemisphere suffers.

Venezuelans are pouring out of the country, putting pressure on Colombia, Peru, Brazil, Ecuador, and other countries who are generously trying to provide them protection and refuge. These desperate people are then susceptible to trafficking and labor exploitation.

Meanwhile, hemispheric problems like drug trafficking are made worse by the corrupt government in Venezuela. Assistant Secretary Billingslea has discussed the considerable effort the United States is making to counter the threat Venezuelan corruption poses to peace and security. Others, including the EU, have issued sanctions to try to address these issues. But everyone, including the Security Council, must do more.

Corruption is not just something for us to dismiss as someone else’s problem. Corruption is at the heart of protests that are affecting international peace and security. Venezuela is a wake-up call. We urge all of our colleagues, both on the Security Council and off, to heed it.