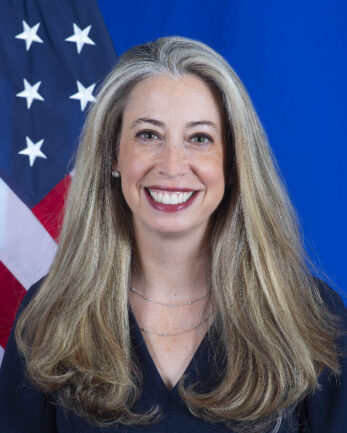 Bernadette M. Meehan was confirmed as U.S. Ambassador to the Republic of Chile by the U.S. Senate on July 20, 2022.
Ambassador Meehan most recently served as Executive Vice President of Global Programs at the Obama Foundation, where she oversaw leadership development programs for emerging leaders and worked to empower adolescent girls around the world. Previously, a career Foreign Service Officer for more than a decade, Ambassador Meehan served in Washington in multiple positions at the White House National Security Council, including Special Assistant to the President for National Security Affairs and Spokesperson for the National Security Council; Senior Advisor; and Director for Strategic Communications. She has also served as Special Assistant to the Secretary of State; Special Assistant in the State Department Executive Secretariat; and a Dean & Virginia Rusk Fellow at Georgetown University’s Institute for the Study of Diplomacy. Her overseas assignments include the U.S. Consulate General in Dubai, United Arab Emirates; the U.S. Embassy in Baghdad, Iraq; and the U.S. Embassy in Bogota, Colombia.

Ambassador Meehan served on the Board of Advisors for Georgetown University’s Institute for the Study of Diplomacy, which brings together students, scholars, and practitioners to explore global challenges and the evolving demands of diplomatic statecraft. She was also a member of the Advisory Council of Hostage US, a 501c3 non-profit organization that supports families of Americans taken hostage or wrongfully detained abroad and supports hostages and detainees when they return home.