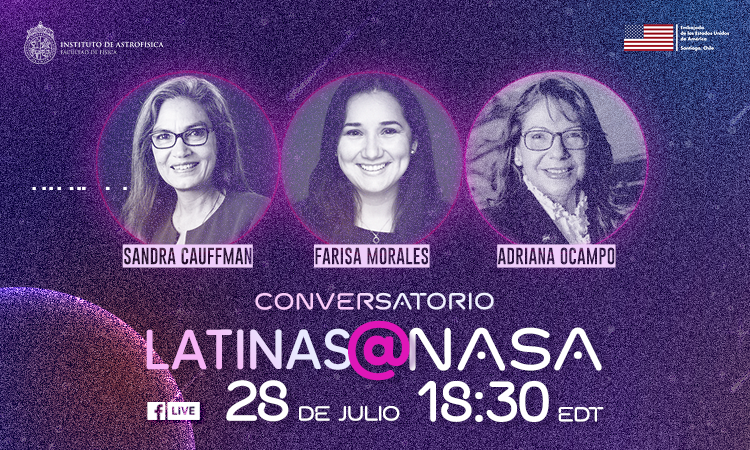 In a virtual conversation to be held next Wednesday, July 28, at 6:30 p.m., the U.S. Embassy in Chile will offer the opportunity to learn about the motivating life of three women of Latino origin, who have developed a transcendental professional career at the National Aeronautics and Space Administration (NASA).

The interactive meeting will include the participation of Sandra Cauffman, Deputy Director of NASA’s Earth Science Division; Farisa Morales, Program Manager of NASA’s Astrophysics and Heliophysics Research and Analysis Office at the Jet Propulsion Laboratory (JPL); and Adriana Ocampo, Assistant Director of NASA’s Science Program. They will share their experience on how they came to study in the United States and their incorporation to NASA, as well as the projects in which they are currently working.

During the conversation, which will be transmitted via Zoom and social networks in conjunction with the Astrophysics Institute of the Pontificia Universidad Católica de Chile, a group of students who are pursuing various scientific careers in Chilean universities will speak to these three outstanding professionals. The public will be able to actively participate by sending in their questions via chat during the live transmission, which will be carried on Facebook Live on different platforms, including that of the U.S. Embassy in Santiago and other U.S. diplomatic missions in the region.

Sandra Cauffman was born in Costa Rica.  She holds a Master’s degree in electrical engineering and has worked at NASA for thirty years. She has been deputy director of the Earth Science Division since 2016, where she is responsible for the executive direction and overall management of the significant budget managed by this office, which includes technology development, applied sciences, research, mission implementation and its operation.

Farisa Morales is of Mexican origin. She is a Ph.D. astrophysicist and current program manager in the Office of Astrophysics and Heliophysics Research and Analysis at NASA’s Jet Propulsion Laboratory (JPL). In this position she conducts research on planets in order to understand their formation, architecture and evolution.

Adriana Ocampo Uria was born in Colombia. She is a geologist and holds a Ph.D. degree. She is a program manager at NASA, where she is in charge of the New Frontiers exploration programs, including the Juno mission to Jupiter and the New Horizons mission to Pluto, among others. Adriana Ocampo was listed by Discovery magazine among the “50 most important women in science.” Her discovery about the impact of the crater that produced the extinction of the dinosaurs has provided scientific evidence to demonstrate that asteroid collisions can produce climatic changes and modify the biosphere of a planet.

This discussion is open to the public and free of charge. Those interested can participate via Zoom, where registration is required, at http://ow.ly/MFGe50FyT5r. or through the U.S. Embassy’s Facebook page https://www.facebook.com/EmbajadaEEUUChile.