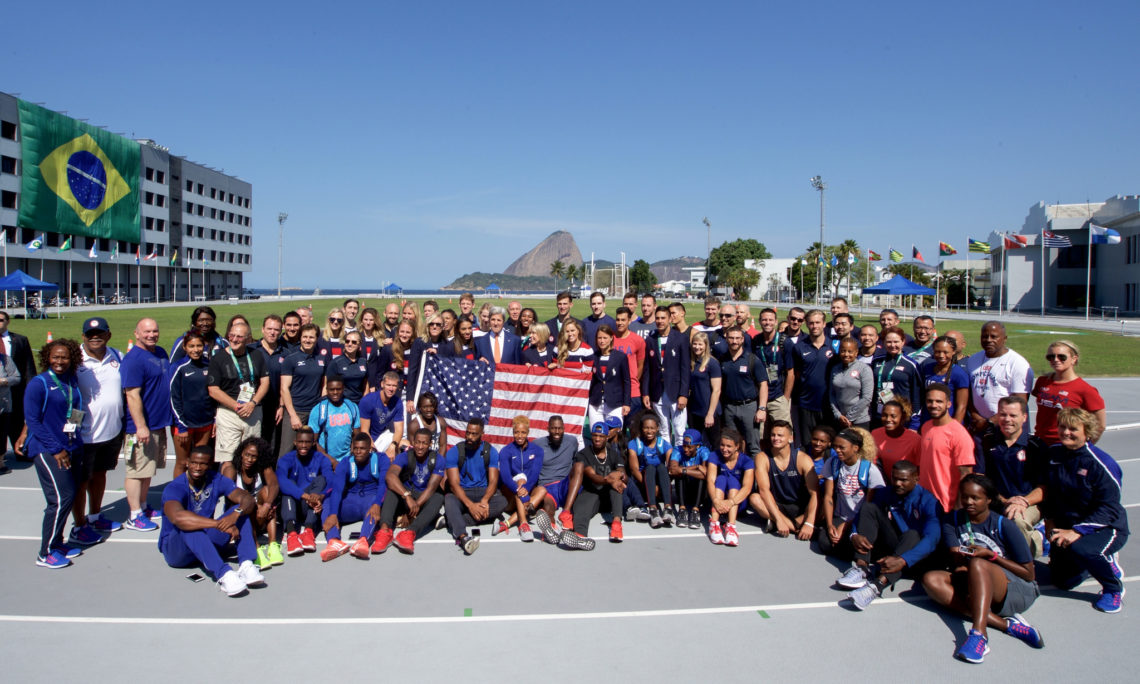 SECRETARY KERRY: I don’t want to temper this energy at all, but I want to say how proud we are of all of you just for getting here, being here and representing the United States of America. And so many of you I’ve actually watched. I watched some of the trials during the times when I was not on the phone with a Russian or a Chinese or somebody. (Laughter.)

But I wanted to tell you on behalf of the whole delegation – we’ve got a delegation here and we have one member of that delegation who knows what you’re going through and what you’re thinking about, and what you’re feeling; one of the world’s most famous swimmers, one of our biggest winners in history, and I want you all to welcome Mark Spitz here. (Applause.)

Mark is a nine gold medal winner, one silver, one bronze, and he won seven gold medals, which for 36 years was the record, folks. He won seven gold medals in Munich in 1972. So we’re really proud to have him as part of this delegation. And it’s a symbol of what you can do on the upside, but I’ve got to tell you just being here, participating, taking part in the Olympics, is such a special thing, and I know you all feel that.

But my message to you on behalf of President Obama and I think all of the American people are that there’s so much more to each of you than a lot of people see than just terrific athletes. And I know there’s some of you who are – we have one member of the team who is a refugee from Eritrea who is working with refugees and helping refugees to relocate. There are others among you who are working with kids to try to take at-risk kids and give them a sense of future. There are folks among you – there’s one who is a Muslim competitive – competitor from the United States of America, a fencer, and she is working with girls, working with our embassy actually in Russia, our embassy in England, helping to set an example for what women can do when they get an opportunity to be able to compete and be part of society in full. That’s a great message.

So not only are we anticipating all of you breaking some records, but we want you to contribute in the great American tradition of the spirit of competition and the values of our country and to break barriers and to reach out to people while you’re here, feel the great spirit of the Olympics, which is, after all, a symbol of nations being able to come together and compete peacefully and find a different way to resolve the differences between us.

So you are just a huge example to the world. Everybody in the United States of America is proud of you. And I know you’re setting out to win medals, but everybody here is a winner already. We want to say thank you to you for everything you’re undertaking.

And for us weekend warriors, we’re in awe of just standing in your – we know what you go through, how hard you worked to get here and how hard you’re going to put out the next few days. So God bless you all. Take care. Go USA. Thank you. (Applause.)

I think you ought to hear not from a weekend warrior but from a real warrior. We’re going to hear something from Mark.

MR SPITZ: Well, it’s an honor here to represent the President, to be with the Secretary of State. I always say that I don’t have to say something that you probably already haven’t heard, and you guys are all champions, but I always get asked why would have I – and just, you have to go back in time before Michael Phelps, but why would have I done what I did. And I think I can share what I felt about what I had done, and I think you’ll take away something similar. It was the mystery, the magic, the wonder, and the innocence of never having done it before. And those were the seeds of creativity that developed into my personal dreams, and I raised my hand in the moment and was accountable for what I was going to do and without excuses. It’s never too late to be the person you thought you could be without excuses.

And somebody asked me just the other day, “When did you realize you were so great?” And I said, “When Michael Phelps broke my record.” Because what I had done became a matter of measure which was for someone not even born yet to inspire, to want to do, pursued with hard work and training, and became, obviously, if you go by medal count, an incredible athlete, and we’re all wondering what he’s going to do. But I’ve always said: But that doesn’t mean that somebody like a Dorothy Hamill that won the gold medal in ice skating is just as good, or, if you have an event that’s only one event and you get a medal, you are just as important as Michael, because we are Olympians forever. And I wish you the best. I’m a big track fan and I’m just looking for positive things this week and the next week when you guys compete. And it was an honor for me to even have two words with you. Thank you. (Applause.)

SECRETARY KERRY: Can I – I just want to leave you with one last thought – it’s not an afterthought either. I meant to mention this. But sports has always been an incredible way of bridging divides, and the truth is that we’ve had major moments of diplomacy where sports has been the initial vehicle to beginning to do that. In China we began to – we didn’t have any relationship with China, and President Nixon began by sending a ping pong team to China, and they engaged in what was called ping pong diplomacy. And in similar ways – we’ve sent baseball players to Cuba. Now we’ve changed our policy with Cuba. We’ve seen any number of – we sent the Boston Celtics in the 1960s. They went over to Russia and they began to break through and into Europe.

So these things make a difference with – and the moments make a difference. I’ll bet you every single one of you, if I stopped to ask you right now, there’s some Olympic moment that you think about that inspired you to say I want to go do that. And I wasn’t in track and field, but I can – or in gymnastics or whatever, but I look back and I can say I can remember Kerri Strug planting that landing on her second attempt and breaking history. We remember those things, right? And you can remember the Olympic hockey team, name it – one thing or another, winter or summer, this is a way to inspire people all over the world. So whatever, have fun at this and remember you’re making a difference and you really can break down barriers. Thank you. God bless. (Applause.)