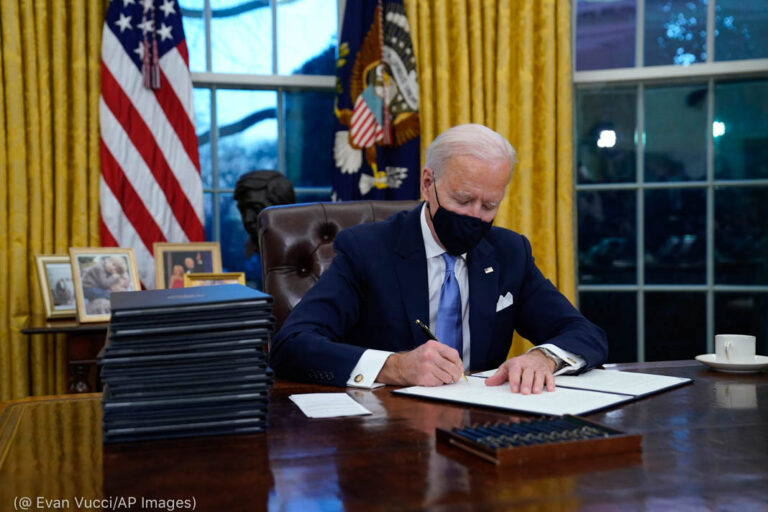 THE PRESIDENT:  Good morning, everyone.  Sorry to keep you waiting a little bit.  I had the honor of spending some time with the Ukrainian Prime Minister, who’s in town today.  And he is meeting with some of my Cabinet members, including the Secretary of Treasury and others.

And we had a — a good discussion.  I talked about what I’m about to tell you about today, as well as — he was thanking the American people for their support, understands it’s significant, and was — we talked about keeping everyone together, in terms of Europe, the European Union, and others, in the effort to stop Putin’s brutality.

But before I head out to the West Coast, I want to quickly update the American people on the latest steps we’re taking to support the people of Ukraine and to hold Putin accountable for his brutal and bloody war.

Russian forces have retreated from Kyiv, leaving behind them a horrifying evidence.  And you’ve seen it and you reported it — your folks.  And, by the way, I — I don’t say this often, but I think we should give enormous credit to the folks in your agencies that are on the ground in Ukraine, in these spots.  And they’re — they’re really — I’ve spoken to several of them.  It’s a — we owe them.  But uncovering these evidences of their atrocities and war crimes against the Ukrainian people — it’s so clear to the whole world now.

And we’re in a critical window now of time where that — they’re going to set the stage for the next phase of this war.

And the United States and our Allies and partners are moving as fast as possible to continue to provide Ukraine the forces that they need — the weapons they need — excuse me — and the equipment they need — their forces need to defend their nation.

Last week, I signed an $800 million package of security assistance to Ukraine that included new capabilities like artillery systems and armored personnel carriers — equipment that is responsive to Ukraine’s needs and tailored to support the intensified fighting in the Donbas region, which is a different war than in other places because both — topographically it’s different.  It’s flat, it’s not in the mountains, and it requires different kinds of weapons to be more effective.

Today, I’m announcing another $800 million to further augment Ukraine’s ability to fight in the east — in the Donbas region.

This package includes heavy artillery weapons — dozens of Howitzers — and 144,000 rounds of ammunition to go with those Howitzers.  It also includes more tactical drones.

In the past two months, we’ve moved weapons and equipment to Ukraine at record speed.

The United States alone has provided 10 anti-armor systems for every one Russian tank that’s in Ukraine — a 10 to 1 ratio.

We’re sharing and will continue to share significant, timely intelligence with Ukraine to help defend them against Russian aggression.

And on top of this, these direct contributions from the United States, we’re facilitating; we’re the outfit facilitating the significant flow of weapons and systems to Ukraine from other Allies and partners around the world, like the S-300 long-range, anti-aircraft systems that Slovakia recently transferred to Ukraine.  We are getting them in there.

We won’t always be able to advertise everything we — that our partners are doing to support Ukraine in its fight for freedom.

But to modernize Teddy Roosevelt’s famous advice: Sometimes we will speak softly and carry a large Javelin.  Because we’re sending a lot of those in as well.

You know, but we’re not — we’re not sitting on the funding that Congress has provided for Ukraine.  We’re sending it directly to the frontlines of freedom, to the fearless and skilled Ukrainian fighters who are standing in the breach.

You got to admit, you have — must be amazed at the courage of this country, the resolve that they’re showing, not just the milit- — their military, but the average citizen: men and women, young — young men, young women as well.

It’s — you know, the sustained and coordinated support of the international community, led and facilitated by the United States, has a — is a significant reason why Ukraine is able to stop Russia from taking over their country thus far.

Every American taxpayer, every member of our Armed Forces can be proud of the fact that our country’s generosity and the skill and service of our military helped arm and repel Russia’s aggression in Ukraine, to beat back Putin’s savagery that tried to seize Ukraine’s capital and wipe out Ukraine’s government.

Combined with our recent drawdowns, it will ensure a steady flow of weapons and equipment into Ukraine over the next few weeks.

However, with this latest disbursement, I’ve almost exhausted the drawdown authority I have that Congress authorized for Ukraine in a bipartisan spending bill last month.

In order to sustain Ukraine for the duration of this fight, next week I’m going to — have to be sending to Congress a supplemental budget request to keep weapons and ammunition flowing without interruption to the brave Ukrainian fighters and to continue to deliver economic assistance to the Ukrainian people.

Hope — and my hope is and my expectation is Congress would move and act quickly.  And I want to thank the Congress — Democrats and Republicans — for their support for the people of Ukraine.

Our unity at home, our unity with our Allies and partners, and our unity with the Ukrainian people is sending an unmistakable message to Putin: He will never succeed in dominating and occupying all of Ukraine.  He will not — that will not happen.

In addition to bolstering Ukraine’s resistance on the battlefield, we’re also demonstrating our support for the people of Ukraine.

Today, the United States is announcing that we intend to provide an additional $500 million in direct economic assistance to the Ukrainian government.

This brings our total economic support for Ukraine to $1 billion in the past two months.

This is money the government can help use to help stabilize their economy, to support communities that have been devastated by the Russian onslaught, and pay the brave workers that continue to provide essential services to the people of Ukraine.

You know, these past weeks have seen a terrible human cost of Putin’s ambition for conquest and control.  Approximately two thirds — two thirds — of all Ukrainian children have been displaced from their homes.  More than 5 million Ukrainians have fled their country.  It’s an absolute outrage.  The idea this is happening approaching the second quarter of the 21st century is just — (sighs).

Last month, when I was in Europe, I announced that the United States would welcome 100,000 Ukrainians so that we share in the responsibility of supporting Ukrainians fleeing Putin’s war machine.

We’ve already welcomed tens of thousands of Ukrainians to the United States.

And today, I’m announcing a program, “Unite for Ukraine” — a new program to enable Ukrainians seeking refuge to come directly from Europe to the United States.

This new humanitarian parole program will complement the existing legal pathways available to Ukrainians, including immigrant visas and refugee processing.

It will provide an expedient channel for secure, legal migration from Europe to the United States for Ukrainians who have a U.S. sponsor, such as a family or an NGO.

This program will be fast.  It will be streamlined.  And it will ensure the United States honors its commitment to go to the Ukrainian people and need not go through our southern border.

We’re also continuing to ratchet up the pressure on Putin and further isolate Russia on the world stage.

Yesterday, the Treasury Department rolled out additional measures to crack down on the entities and individuals attempting to evade our unprecedented sanctions — not just ours, but throughout the West.

Today, I’m announcing that the United States will ban Russian-affiliated ships from our ports, as they did in Europe.

That means no ship — no ship that sails under the Russian flag or that is owned or operated by Russian interests will be allowed to dock in a United States port or access our shores.  None.  None.

This is yet another critical step we’re taking in concert with our partners in the European Union, the United Kingdom, and Canada and — further to deny Russia the benefits of the international economic system that they so enjoyed in the past.

We don’t know how long this war will last.  But as we approach the two-month mark, here’s what we do know:

Putin has failed to achieve his grand ambitions on the battlefield.  After weeks of shelling Kyiv, Kyiv still stands.

And the Ukrainian armed forces, joined by many brave Ukrainian civilians, have thwarted Russia’s conquest of their country.

They have been bolstered from day one by an unstinting supply of weapons, ammunition, armor, intelligence from the nations of the free world led by us, the United States.

As Russia continues to grind out the military advances and — their military advances and the brutalities against Ukraine, Putin is banking on us losing interest.  That’s been my view; you’ve heard me say this from the beginning.  He was counting on NATO, the European Union, our allies in Asia cracking, moving away.  He’s betting on Western unity will crack.  He’s still betting on that.

And, once again, we’re going to prove him wrong.  We will not lessen our resolve.  We’re going to continue to stand with the brave and proud people of Ukraine.  We will never fail in our determination to defend freedom and oppose tyranny.  It’s as simple as that.

So, thank you very much.  Thank you.

THE PRESIDENT:  I’m going to take just one or two questions.  I’ve got a plane to catch.

Q    What does — what does Putin claiming control over Mariupol mean?  Is that — how significant is that?

THE PRESIDENT:  Well, first of all, it’s questionable whether he does control Mariupol.  One thing for sure we know about Mariupol: He should allow humanitarian corridors to let people on that steel mill and other places that are buried under rubble to get out — to get out.  That’s what any, any, any head of state would do in such a circumstance.

And so, there is no evidence yet that Mariupol has completely fallen.

THE PRESIDENT:  No.  What I’m considering is continuing to hear from my — my —

Well, first of all, there’s going to be an appeal by the Justice Department because, as a matter of principle, we want to be able to be in a position where if, in fact, it is strongly concluded by the scientists that we need Title 42, that we be able to do that.

But there has been no decision on extending Title 42.

Q    Mr. President, how long can the U.S. maintain the level and pace of this military support for Ukraine?

THE PRESIDENT:  I — well, we have the capacity to do this for a long time.  The question is: Are we going to continue to maintain the support of the international community and keep the pressure on Putin to prevent him from overrunning the country?  Number one.  And, number two, make sure we continue to maintain the economic sanctions, which, over time — and we’re beginning to see it — are devastating their economy and their ability to move forward.

So, the most important thing right now is maintain the unity.  So far, so good.

THE PRESIDENT:  The answer — that’s being decided now.  And I’m asking the Defense Department to put together what they think we need.