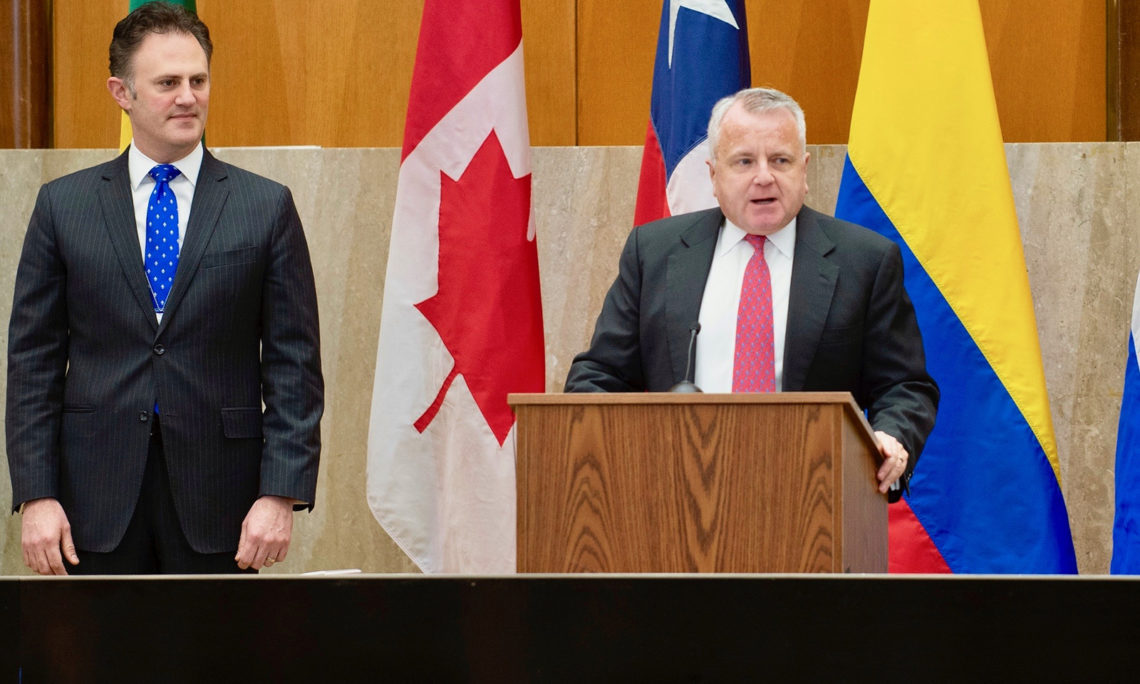 DEPUTY SECRETARY SULLIVAN: Thank you very much. Good morning, everyone. Thank you, Nathan, for that kind introduction. It’s my pleasure to welcome you all – esteemed ministers, colleagues, and guests – to this important discussion on counterterrorism in the Western Hemisphere. I’d like to begin, as Nathan said, to thank all of you for making what in many cases was a long trip here to Washington, D.C. for this gathering.When we think about transnational terrorism, many immediately picture families grieving after a large-scale attack on civilians who are halfway around the world, or black ISIS flags flying in the group’s last pocket of resistance in Syria. But transnational terrorism poses an immediate threat to us here in the Western Hemisphere. Although the perceived center of gravity seems far away, groups like ISIS, al-Qaida, Lebanese Hizballah operate wherever they can find recruits, raise support, operate unchecked, and pursue their terrorist agendas.

Keeping our citizens safe and secure requires constant vigilance and adequate resources. Although our countries are many thousands of miles away from Syria and Iraq, we know that there have been many attempted terrorist attacks, a number that have been narrowly prevented, and unfortunately some that have been carried out.

Our militaries work together to fight terrorism on the battlefield, but as deputy secretary of state, I see every day how all parts of our government and yours contribute to fighting terrorism abroad and here at home. Since September 11th, 2001, if we’ve learned nothing else, we’ve learned that – the hard and valuable lesson that the only way to defeat these malign terrorist plots is for our border security, law enforcement, intelligence, and financial agencies to coordinate and collaborate on all levels.

Each of your delegations has traveled here today because you recognize, as we do, that global terrorist threats are evolving every day, that our governments have vital experiences and information to share with one another, and that the only way to counter the serious challenges that remain is by working together. Terrorist groups and the individuals they radicalize are constantly learning and adapting to plan more complex, fluid, and decentralized operations, making them even harder to detect and disrupt. Terrorists aim to exploit policy and resource gaps within and across our borders. Any lack of interagency coordination within and between governments contributes directly to terrorists’ ability to exploit any fissures.

ISIS and al-Qaida broadcast their global vision loudly. Even as ISIS clings to its last territory in Syria, it is through its videos and carefully calibrated public messaging that they can continue to assert a longer worldwide fight. Through these messages, ISIS continues to seek women and men across the globe whom they can radicalize and inspire to take up the cause and carry it out wherever they can. In contrast to ISIS’s brash public campaigns, other terrorist groups are often more discreet about their worldwide operations. But we’re not fooled. These organizations remain just as dangerous and just as close.

One such organization is Lebanese Hizballah, which, despite its name, operates within many of our own borders and far from the Middle East. In 1994, Hizballah killed 95 people and injured hundreds more in Buenos Aires when it attacked the Argentine Israelite Mutual Association, just two years after it had attacked the Israeli embassy there.

We’re thankful that attacks on that scale have since been prevented, but several of your governments are still confronted with Hizballah plots on a regular basis. Just this September, Brazil arrested a Hizballah financier in the tri-border area near Paraguay and Argentina. In 2016, Paraguay arrested another Hizballah operative smuggling out 39 kilos of cocaine, whom we in the United States are prosecuting in Miami.

Each of our governments has made progress to ensure that our counterterrorism policies are more nimble and more effective to keep pace with the ever-growing terrorist threat, even shrinking the number of gaps the terrorists might seek to exploit. Argentina has worked on reforming criminal laws to better prosecute terrorists. Trinidad and Tobago has established an interagency taskforce to gather terrorism-related intelligence that can be used as courtroom evidence.

U.S. policy, too, continues to improve and adapt. In October, President Trump released our new Counterterrorism Strategy, the first new national counterterrorism strategy for this country since 2011. It prescribes a comprehensive and coordinated approach to bring to bear all facets of American power against terrorist threats. It modernizes and integrates our counterterrorism tools and places a new emphasis on nonmilitary capabilities.

By design, the strategy does not have a geographical focus. That’s because the most serious threats are transnational, spanning borders around the world. It is also not focused on just one of two groups, but on the full range of terrorist threats, including Iran-backed groups.

As the President has said, our “America First” policy to defend our country does not mean America alone. We seek to continue leading the fight against groups like ISIS and al-Qaida and Lebanese Hizballah, but we’re also asking our allies and partners to join us in that fight and do more as well.

Our safety depends on working with all of you on security as we continue to improve our own. We must learn from one another to develop our tools and policies, and to be both faster and smarter than those who wish to harm us. Protecting our own individual countries means protecting the entire region. We must each do our part and work together to defend our citizens, our countries, and the values we hold dear.

I’m encouraged that we are already exploring opportunities to cooperate in, be it through membership in the Global Coalition to Defeat ISIS or the Financial Action Task Force regional style body in Latin America, working within the Organization for American States Inter-American Committee against Terrorism, implementing the Caribbean Community counterterrorism strategy, or fulfilling UN Security Council obligations targeting foreign terrorist fighters and financiers of terrorism.

And some of you have done even more. Last year we worked with Argentina to host their Brazilian and Paraguayan neighbors for a practitioner’s workshop to discuss terrorist issues facing the tri-border region. Brazil, likewise, hosted the Inter-American Committee against Terrorism training last year to advance dialogues on illegal and terrorist use of the internet.

However, this fight against terrorism today is not just about governments. To effectively counter terrorist threats, we need to consider collaboration across a broader range of actors, including civil society and community leaders, the private sector, and religious figures. We all have unique resources, experiences, relationships, and capabilities that, if we listen to each other, can help us develop a stronger, more innovative, and more sustainable counterterrorism policy.

Your participation here today reinforces that your governments not only recognize the great threats today that face our countries and our region, but also that you have valuable experience countering terrorists and holding plotters and supporters accountable. I hope we hear from each of you about where you have been successful and where you think we can make more progress together.

We have the opportunity today to prioritize cooperation and look across ministry lines and across national borders for new ideas and new ways by which to improve our existing efforts to be as effective as possible. We’re eager to learn from you today and continue to learn from you going forward so that your countries and our country, and the Western Hemisphere we call home, becomes safer and more secure.

Thank you again for joining us for today’s discussion, and I’m looking forward to speaking with all of you. Thanks.