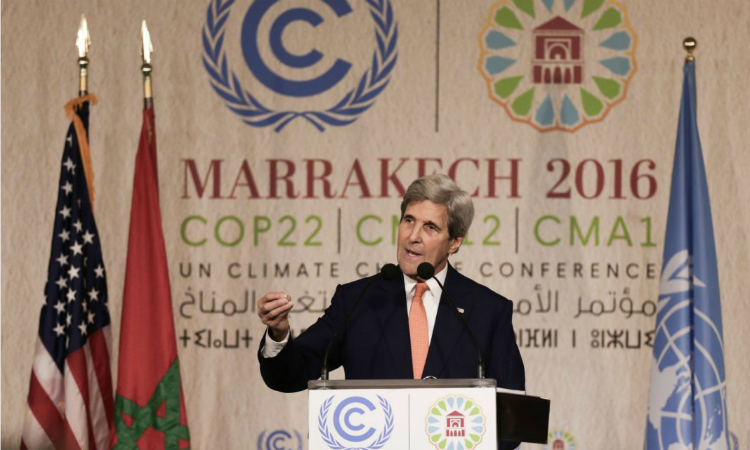 “What we do right now, today, matters,” Secretary of State John Kerry said November 16 at the global climate summit in Marrakech, Morocco, where delegates were meeting to shape rules to implement the Paris climate agreement.

An “overwhelming majority” of Americans know that climate change is happening and want the U.S. to honor its commitments under the Paris climate agreement, Kerry added.

“I can tell you with confidence that the United States is right now today on our way to meeting all of the international targets we have set,” Kerry said. “Because of the market decisions that are being made, I do not believe that that can or will be reversed.”

Kerry cited scientists, businesses, mayors, young people, and U.S. military and intelligence community leaders who have all recognized the dangers of climate change and are working to transition to a low-carbon world.
Kerry praised the Paris deal as a framework that is “built to last” for future generations. He mentioned his granddaughter, whom he brought to the podium in April when he signed that agreement for the United States. “I thought of the future. Her future. The world her children would one day inherit. I will never forget it.”

You can follow the November 7–18 global climate summit @US_Center, and use the hashtags #ActOnClimate and #AskUSCenter.