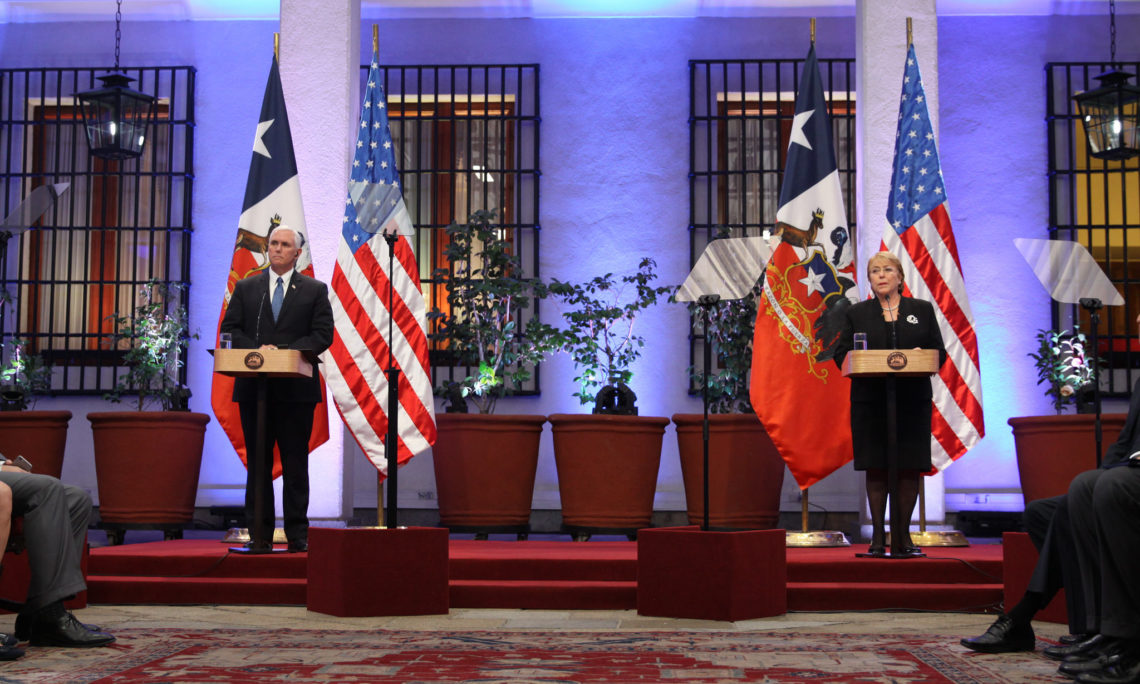 PRESIDENT BACHELET:  (As interpreted.)  Mr. Vice President of the United States of America, Mr. Michael Richard Pence, and distinguished delegation, Mr. Foreign Minister Heraldo Muñoz, representatives of the diplomatic corps of the U.S., and dear friends, today, we received the Vice President of the United States, Michael Pence, in our country, and his visit is an example of the strength of our ties.  It’s an expression of interest of working with Chile in a broad agenda — regional, multilateral, and national issues.

The relationship with the United States is strategic — politically and economically.  We share views on democracy, human rights, and opening of markets.  And today, we’ve approached different issues of interest.  Among them, the program related to visa waiver U.S.  And Chile the only country of Latin America — of the 38 states — beneficiary of the program.  And this has involved that.  After three years of coming into force, more than 400,000 tourists of Chile have gone to the United States.

With the Vice President, Mike Pence, we have discussed our sound trade and economic relationship within the FTA, as subscribed by both countries.  And this agreement has more than one decade.  One hundred percent of the products is tariff-free.  Likewise, the agreement provides access to services guaranteeing intellectual property rights and incentivizes investments of the U.S. in different sectors of our economy.

In addition to that, we discusses our very fruitful political relationship, underlining our ties, not only federally and with different states.  In areas like energy, science, technology, and renewable energies, we are discussing with (inaudible) and researchers.  And also, we have reaffirmed our interest and commitment to work jointly with countries of the Northern Triangle of Central America and Haiti in order to cooperate for institutional strengthening and governance.

Likewise, we have spoken about the peace process of Colombia, a country that has received Vice President Pence.  Chile has been fully committed to support Colombia in all of its projects to create peace and well-being for its citizens.

And also, in Latin America, allow me to refer to Venezuela — something that we have also discussed.  Chile, like 11 countries of the region, subscribed the Declaration of Lima a week ago, and this explains our ways to contribute to restore democracy in Venezuela through a peaceful and negotiated way out.  There is high concern for the levels of violence and humanitarian crises experienced by Venezuela, generating a tremendous wave of migration to neighboring countries.  Chile will do its utmost to support Venezuela to find a peaceful way out.  But Chile will not support military interventions, nor coup d’état.  As to sanctions, we’ll support all those adopted by the Security Council of the U.N.

As to sensitive issues, Chile has expressed in the General Assembly, Security Council, and OAS, its concern for the nuclear weapons program of Northern Korea.  It calls to renew all the diplomatic efforts and conversations — tripartite — to the North, South Korea, China, the Russian Federation — in order to have nuclear Korea — rather, a Korean Peninsula without nuclear weapons.

And also, in our energy and climate partnership of the Americas, ECPA, that will be held in Chile in September next.  And Chile will be the venue of the next meeting of APEC 2019.  And on that occasion, we hope to have all the collaboration of the United States.