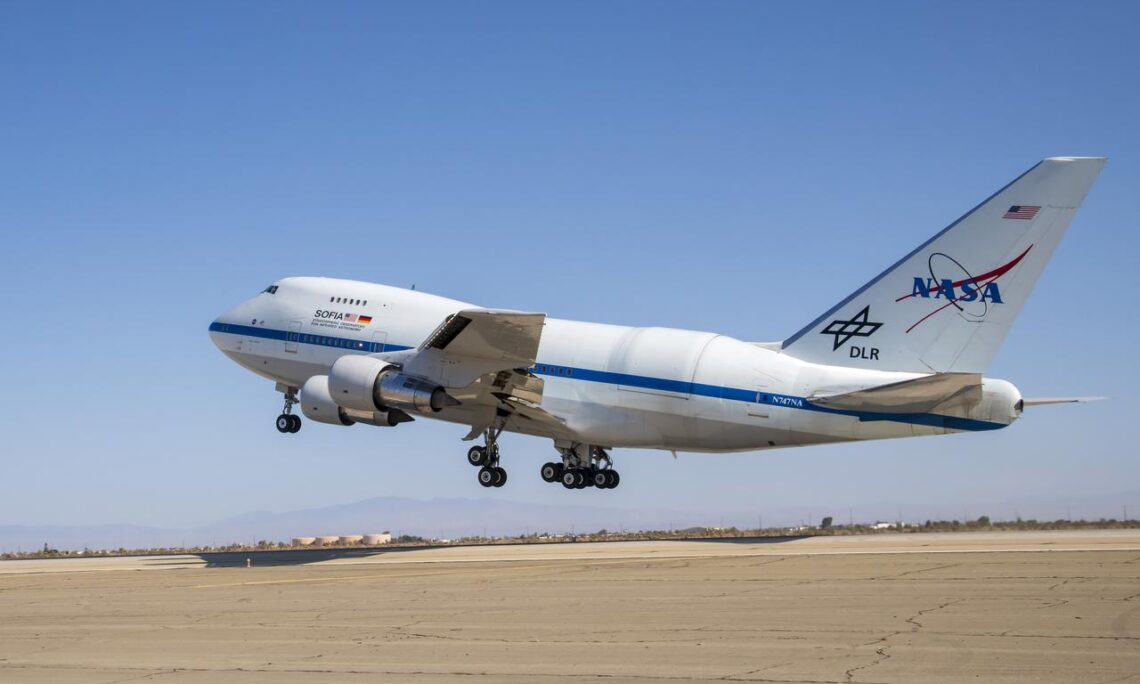 NASA’s Stratospheric Observatory for Infrared Astronomy, or SOFIA, landed at the Santiago International Airport on March 18, 2022. Like other deployments to the Southern Hemisphere, SOFIA is temporarily changing its base of operations from Palmdale, California, to Santiago, Chile, to observe celestial objects that can only be seen from Southern Hemisphere latitudes. NASA and its partner of the SOFIA mission, the German Space Agency at DLR, are excited to deploy to Chile for the first time.

This is SOFIA’s first visit to South America, and its first short-term deployment that will last two weeks. The team will operate from the Santiago International Airport to accomplish eight science flights. SOFIA will primarily observe the Large and Small Magellanic Clouds during the deployment, which are two galaxies that are our Milky Way’s closest galactic neighbors. Both are gravitationally bound with the Milky Way and will eventually merge with our galaxy in several billion years.

“Scientific collaboration, particularly in astronomy, has been a cornerstone of the U.S.-Chile relationship dating back to the establishment of the Observatorio de Cerro Santa Lucia in Santiago more than 170 years ago,” said Richard Glenn, the U.S. Embassy Chile Chargé d’Affaires. “NASA’s SOFIA deployment to Chile is the next exciting milestone in that relationship, bringing us closer to the stars than ever before.”

This is called a short deployment because of the shorter time in country compared to SOFIA’s long deployments, where more than 25 flights are typically planned using multiple instruments. The SOFIA team is taking a single instrument, the Far Infrared Field Imaging Line Spectrometer, or FIFI-LS, and will observe several critical Southern Hemisphere celestial targets.

“We are thrilled to deploy to Chile so we can provide more access to the Southern Hemisphere skies for our scientific community,” said Naseem Rangwala, SOFIA’s project scientist. “We are increasing our deployment tempo with a focus on efficiency and prioritized targets, and we are grateful for the opportunity to do that from Santiago.”

Since the Large Magellanic Cloud, or LMC, is so close to our galaxy, SOFIA can observe it in great detail, on relatively small astronomical scales, to help scientists better understand how stars formed in the early universe. Having the context of the physical areas in which stars form is why these LMC observations are so powerful. Scientists cannot see detailed physical structures in distant, ancient galaxies, so, instead, galaxies like the LMC are observed as local stand-ins. The planned observations are to create the first map of ionized carbon in the LMC. These observations pair well with NASA’s upcoming Galactic/Extragalactic ULDB Spectroscopic Terahertz Observatory, or GUSTO mission, and they extend the legacy of the Herschel Space Observatory.

In addition to the observations of the Large Magellanic Cloud, SOFIA will observe supernova remnants to investigate how certain types of supernovas might have contributed to the abundance of dust in the early universe. SOFIA will also attempt its first observation to measure the primordial abundance of lithium by looking into the halo of our galaxy where clouds of neutral hydrogen can be found. These clouds have been relatively undisturbed and thus directly probe the properties of pristine gas that existed in the early universe. A successful observation of lithium could have implications for our understanding of fundamental physics and the early universe because there is a significant discrepancy in lithium abundance between the big-bang theory of the evolution of the universe and the observed abundance from astronomical measurements.

SOFIA is a joint project of NASA and the German Space Agency at DLR. DLR provides the telescope, scheduled aircraft maintenance, and other support for the mission. NASA’s Ames Research Center in California’s Silicon Valley manages the SOFIA program, science, and mission operations in cooperation with the Universities Space Research Association, headquartered in Columbia, Maryland, and the German SOFIA Institute at the University of Stuttgart. The aircraft is maintained and operated by NASA’s Armstrong Flight Research Center Building 703, in Palmdale, California.

Media inquiries regarding SOFIA’s southern deployment should be sent to the NASA Ames newsroom.