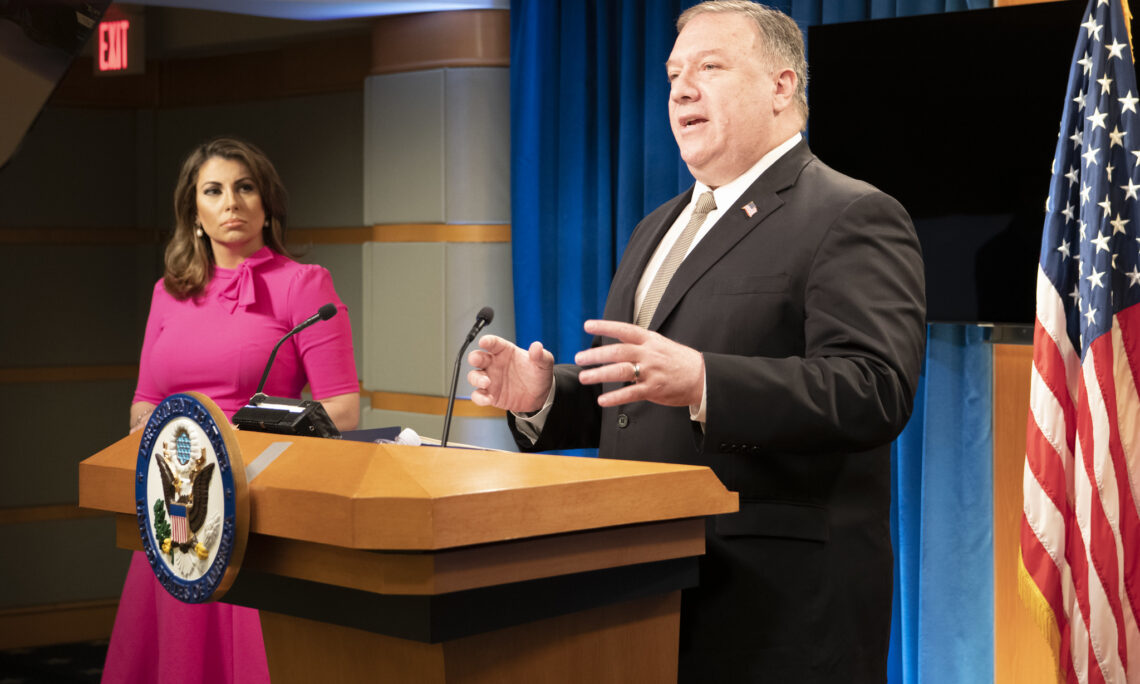 SECRETARY POMPEO: Thank you, Nicolas. Thanks for the couple words in English there. I appreciate that.

Good morning, everyone. Good to see you, Secretary General. Rosemary, thank you for your comments this morning. I would like to say you made some comments about humanitarian assistance inside of Iran. The United States has tried to facilitate that, in light of the COVID issues inside of Iran. Indeed, we offered our own American assistance to the Iranians, which was rejected by them. So to suggest somehow that our sanctions have prevented humanitarian assistance to get into Iran I think is a misunderstanding of the situation on the ground.

Because of the flawed nuclear deal negotiated by the previous American administration, the arms embargo on the world’s most heinous terrorist regime is scheduled to expire on October 18th, a mere four months from now. Four months.

This chamber has a choice: Stand for international peace and security, as the United Nations’ founders intended, or let the arms embargo on the Islamic Republic of Iran expire, betraying the UN’s mission and its finest ideals, which we have all pledged to uphold.

If you fail to act, Iran will be free to purchase Russian-made fighter jets that can strike up to a 3,000 kilometer radius, putting cities like Riyadh, New Delhi, Rome, and Warsaw in Iranian crosshairs.

Iran will be free to upgrade and expand its fleet of submarines to further threaten international shipping and freedom of navigation in the Strait of Hormuz, the Persian Gulf, and the Arabian Sea.

Iran will be free to purchase new and advanced technologies for its proxies and partners throughout the Middle East, including Hamas, Hizballah, and the Houthis.

Iran will hold a sword of Damocles over the economic stability of the Middle East, endangering nations like Russia and China that rely on stable energy prices.

Iran will be free to become a rogue weapons dealer, supplying arms to fuel conflicts from Venezuela, to Syria, to the far reaches of Afghanistan.

In November of last year, President Rouhani himself said, quote, “When the embargo . . . is lifted next year, we can easily buy and sell weapons,” end of quote. We should take him at his word.

Iran is not a responsible democracy like Australia or India. We already know that[1] Tehran will do, if given the ability to buy more weaponry.

Iran is already violating the arms embargo, even before its expiration date. Imagine if Iranian activity were sanctioned, authorized by this group, if the restrictions were lifted.

And we don’t need the secretary general’s report to see what else the regime is doing. In January, Iran launched an attack on the coalition forces in Iraq with its own advanced missiles.

Iran, even as we sit here today, supplies Shia militia groups like Kata’ib Hizballah – groups which have launched dozens of rocket attacks since the fall of last year against U.S. and coalition forces fighting the important continued important campaign against Daesh.

Iran unleashes ship-mining attacks on commercial vessels in the Gulf of Oman, as it did in May and June of last year.

Nearly all countries have arms. Mature nations use them for defensive purposes and to promote stability.

But not the Islamic Republic of Iran.

Don’t just take it from me or from the United States; listen to countries in the region. From Israel to the Gulf, countries in the Middle East – who are most exposed to Iran’s predations – are speaking with a single voice: Extend the arms embargo.

This council has a responsibility to listen to them.

The United States’ overwhelming preference is to work with this council to extend the arms embargo to protect human life, to protect our national security, and to protect yours.

We’ve imposed arms restrictions on Tehran in various forms for 13 years, and with good reason, and to substantial effect.

When we unanimously adopted UN Security Council Resolution 1747 back in 2007 – which, among other actions, prohibited arms transfers from Iran – the United Kingdom’s representative to the council said, quote, “The path of proliferation by Iran is not one that the international community can accept,” end of quote.

I welcome the statement from the United Kingdom, from France and Germany, recently recognizing that lifting the embargo would have major implications for regional security and stability.

I also welcome the support of almost 400 members of the United States Congress. For those of you not tracking, there’s only 435. Those almost 400 members supported my diplomacy to extend this arms embargo. Our concern is a matter of national security, not partisan politics.

We saw from Iran’s actions while implementing the JCPOA that the regime doesn’t moderate when we lift sanctions or weaken accountability.

In fact, it does just the opposite.

While still claiming to remain in the deal, Iran, by its own admission, and as confirmed by the IAEA, is showing no signs of slowing its destabilizing nuclear escalation.

Iran is also accumulating dangerous knowledge. For example, late last year Iran announced that its scientists were working on a new centrifuge – the IR-9 – that would allow Tehran to enrich uranium up to 50 times faster than the IR-1 centrifuges allowed under the JCPOA.

Even as Iran pursues research that could threaten its breakout time to a nuclear weapon, it’s also denied IAEA inspections access to locations Iran is obligated to provide.

This council cannot simply hope that Iran acts in good faith, given its indisputable fact pattern.

The council must hold Iran accountable. And we all have the chance to do so.

Article I of the UN Charter says the purpose of the UN is to “take effective collective measures for the prevention and removal of threats to … peace.”

Consider the overwhelming evidence that I’ve detailed today. It’s a fraction of the evidence available. If Iran isn’t a threat to peace that demands a collective measure, I do not know what is.

The council must reject extortion diplomacy. President Rouhani recently declared, quote, “Iran will give a crushing response if the arms embargo on Tehran is extended.” End of quote.

Renewing the embargo will exert more pressure on Tehran to start behaving like a normal nation.

Seventy-five years ago, the founders of the UN came together after the devastation of World War II to ensure that the world would never again have to face such horrors.

Let’s not shrink from the challenge before us simply because the path ahead seems hard.

Let’s uphold the mission of this body to address the threats to international peace and security that the Islamic Republic of Iran presents.

And let’s take real action in the name of this council by extending the arms embargo.

Thank you all for allowing me to be here today.