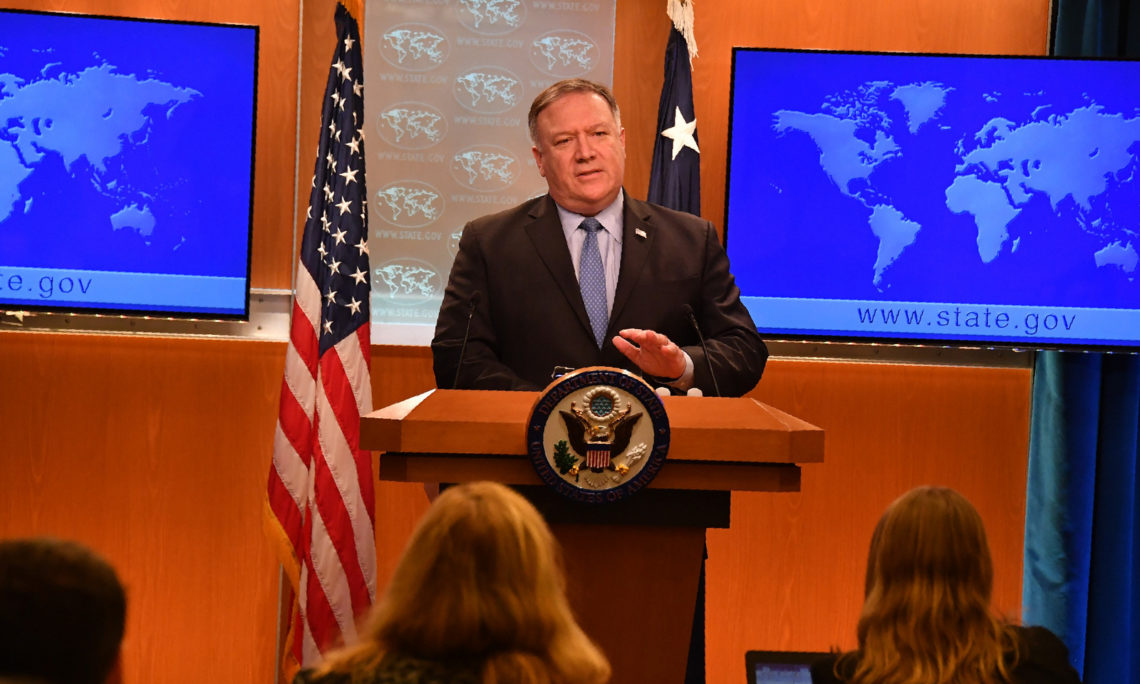 Remarks to the Press

SECRETARY POMPEO:  Good morning, everyone.  Welcome.  I’m here to announce an important decision regarding the United States policy towards Cuba.

In 1996, Congress passed the Cuban Liberty and Democratic Solidarity Act, also known as Libertad.  Until Title III of that act, United States citizens who had their property confiscated by the Castro regime were given the right to file suit against those who traffic in such properties.

But those citizens’ opportunities for justice have been put out of reach for more than two decades.  For now more than 22 years, every president, every secretary of state has suspended Title III in the hope that doing so would put more pressure on the Cuban regime to transition to democracy.

But just as we did in regard to moving our embassy to Jerusalem, the true capital of Israel, or designating the Islamic Revolutionary Guard Corps for what it is, a terrorist organization, the Trump administration recognizes reality.  We see clearly that the regime’s repression of its own people and its unrepentant exportation of tyranny in the region has only gotten worse because dictators perceive appeasement as weakness, not strength.

President Obama’s administration’s game of footsy with the Castros’ junta did not deter the regime from continuing to harass and oppress the heroic Ladies in White, a group of women dedicated to peacefully protesting the regime’s human rights abuses.

More broadly, the regime continues to deprive its own people of the fundamental freedoms of speech, press, assembly, and association.  Indeed, according to NGO reports, Cuban thugs made more than 2,800 arbitrary arrests in 2018 alone.  In the run-up to the country’s recent sham constitutional referendum, one that enshrined the Communist Party as the only legal political party in Cuba, the regime harassed, beat, and detained leaders and – opposition leaders and activists.  Three hundred and ten people were arbitrarily detained according to the Cuban Commission on Human Rights and National Reconciliation.

Cuba’s behavior in the Western Hemisphere undermines the security and stability of countries throughout the region, which directly threatens United States national security interests.  The Cuban regime has for years exported its tactics of intimidation, repression, and violence.  They’ve exported this to Venezuela in direct support of the former Maduro regime.  Cuban military intelligence and state security services today keep Maduro in power.

Sadly, Cuba’s most prominent export these days is not cigars or rum; it’s oppression.  Detente with the regime has failed.  Cozying up to Cuban dictators will always be a black mark on this great nation’s long record of defending human rights.

For these reasons, I’m announcing that the Trump administration will no longer suspend Title III.  Effective May 2nd, the right thing to bring – the right to bring an action under Title III of the Libertad Act will be implemented in full.  I have already informed Congress of my decision.

Implementing Title III in full means a chance at justice for Cuban Americans who have long sought relief for Fidel Castro and his lackeys seizing property without compensation.  For the first time, claimants will be able to bring lawsuits against persons trafficking in property that was confiscated by the Cuban regime.  Any person or company doing business in Cuba should heed this announcement.

In addition to being newly vulnerable to lawsuits, they could be abetting the Cuban regime’s abuses of its own people.  Those doing business in Cuba should fully investigate whether they are connected to property stolen in service of a failed communist experiment.  I encourage our friends and allies alike to likewise follow our lead and stand with the Cuban people.

As I said throughout my trip to South America this last week, the Trump administration is committed to helping grow the wave of democracy, good governments, and openness, which is steadily building throughout the entire Western Hemisphere.  On my trip last week, I saw these positive changes firsthand, and told our friends and allies that we’re with them.  We’re on the side of what’s right and what is just.

Today we are holding the Cuban Government accountable for seizing American assets.  We are helping those whom the regime has robbed get compensation for their rightful property.  And we’re advancing human rights and democracy on behalf of the Cuban people.

Now I will turn it over to Western Hemisphere Assistant Secretary Kim Breier to take some of your questions this morning.  Thank you all.