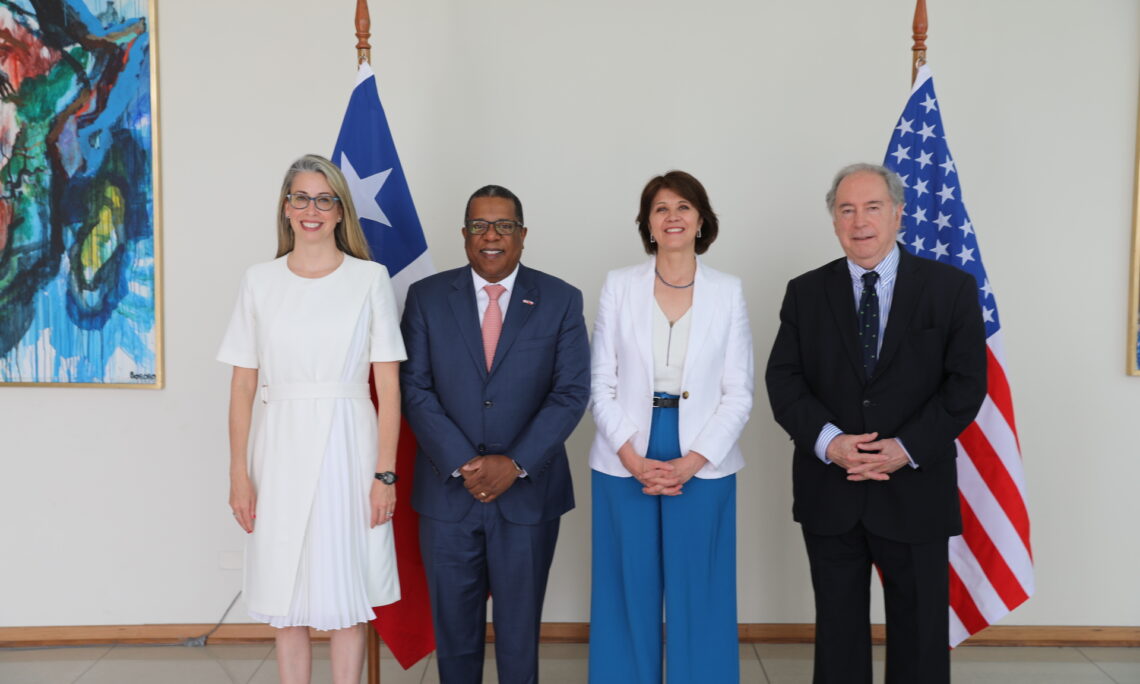 Chilean Minister of Foreign Relations (acting) Ximena Fuentes and U.S. Assistant Secretary of State for Western Hemisphere Affairs Brian A. Nichols co-chaired the High-Level Bilateral Political Consultative Mechanism on November 17 in Santiago, Chile.  The High-Level Dialogue included senior U.S. representatives from the Department of State and National Security Council and senior Chilean representatives from the Ministry of Foreign Affairs, and Ministry of Interior and Public Security.

The dialogue reflected the dynamism and strong partnership between Chile and the United States, which was also expressed in the meeting between Presidents Boric and Biden in the framework of the IX Summit of the Americas held in Los Angeles and Secretary of State Antony Blinken’s October 4-5 visit to Chile.

Acting Minister Fuentes and Assistant Secretary Nichols signed a Memorandum of Understanding on Diversity, Equity, Inclusion, and Accessibility – witnessed by Ambassador Gina Abercrombie-Winstanley, Chief Diversity and Inclusion Officer of the U.S. Department of State, and Verónica Rocha, Coordinator of Feminist Foreign Policy at the Chilean Ministry of Foreign Affairs – to facilitate bilateral cooperation and information exchange on promoting equality and combating discrimination.

Under-Secretary of the Interior Manuel Monsalve and U.S. Ambassador to Chile Bernadette Meehan signed a Memorandum of Understanding between Chile and the United States that grants Chilean law enforcement access to the eTrace program, which traces the origin and purchase of firearms used in violent crimes to support criminal prosecutions.

Both governments applauded the launch of a Women, Peace, and Security subcommittee within the framework of the annual Defense Consultative Committee meetings on September 13, 2022, between the U.S. Department of Defense and Chilean Ministry of Defense.

The two governments noted the 2020 U.S.-Chile Cultural Property Agreement enabled U.S. and Chilean law enforcement, together with the Chilean Ministry of Cultures, Arts, and Patrimony and U.S. Department of State, to collaborate on the return of five objects of Chilean cultural patrimony in 2022.

Acting Minister Fuentes announced that Chile will endorse the Declaration for the Future of the Internet, which seeks to revitalize a common democratic vision to an “open, free, global, interoperable, reliable, and secure” Internet that respects human rights; reinforces a common, democratic vision for an open digital future; and enables economic opportunity.  Chile joins the United States and approximately 60 governments and partners that have endorsed the Declaration.

The U.S. Department of State and Chilean Ministry of Foreign Affairs announced that in 2023 they will relaunch the Political-Military Dialogue and hold the next Space Security Dialogue to address challenges and opportunities related to security and defense.

Both governments agreed to cooperate and exchange experiences in the strategic planning processes between the Chilean Ministry of Foreign Affairs and the U.S. Department of State.

The United States and Chile agreed to relaunch the U.S.-Chile Science, Technology, and Innovation Council in 2023 to deepen public-private partnership on science and technology.  Both governments pledged their intent to sign a Memorandum of Understanding in 2023 on energy cooperation.  The agreement will support development of the green hydrogen industry.

Assistant Secretary Nichols and Acting Minister Fuentes highlighted a number of activities and initiatives to be developed in 2023, within the framework of the roadmap:

Chile and the United States will commemorate 200 years of official relations and the 20th anniversary of our Free Trade Agreement in 2023.  Both governments agreed to collaborate closely to develop programs, visits, and activities that showcase the breadth and depth of the Chile-U.S. partnership.

Chilean Minister of Foreign Relations (a) Fuentes and Assistant Secretary Nichols agreed to hold the next meeting of the High-Level Bilateral Political Consultative Mechanism in 2023 in Washington, D.C.