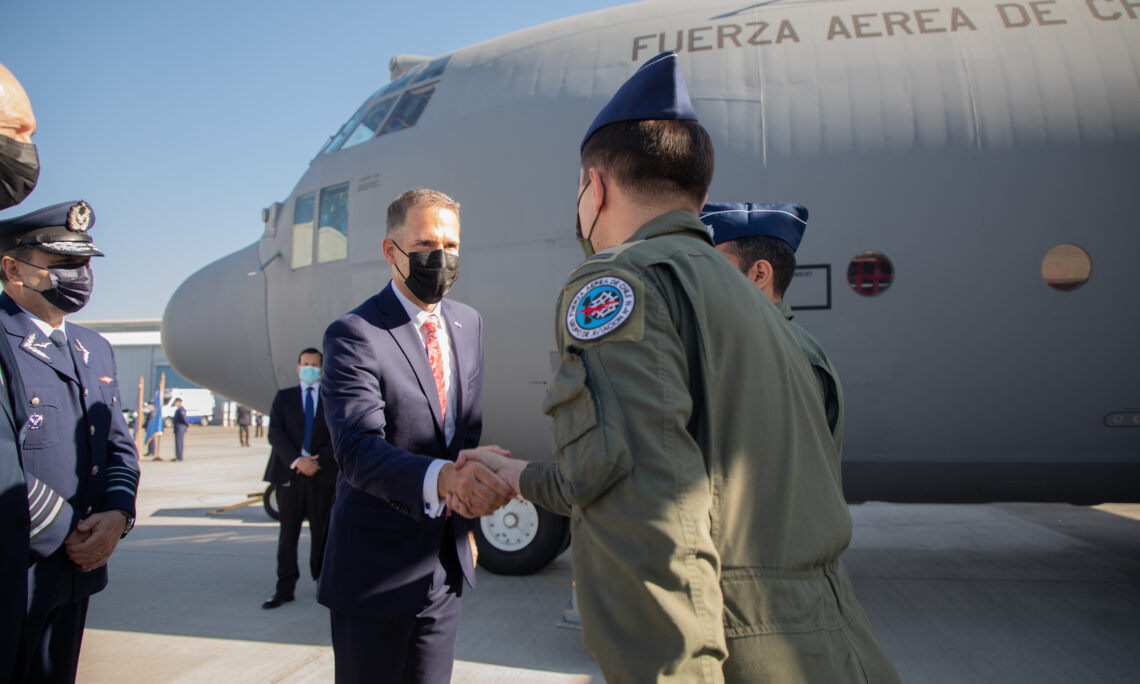 The United States Air Force completed the transfer to Chile of two C-130 Hercules aircraft, for a total value of US$24 million, in what is an expression of the friendship between the two countries and a an example of the excellent and extensive cooperation between the two nations.

In a ceremony held on Monday, October 25 at the Pudahuel Air Base of the 2nd Air Brigade of the Chilean Air Force (FACH), U.S. Embassy Chargé d’Affaires Richard Glenn led the official handover of the aircraft to the Chilean authorities. The ceremony was attended the Minister of Defense, Baldo Prokurica; the Undersecretary of the Armed Forces, Alfonso Vargas; the Commander in Chief of the FACH, General Arturo Merino; and the Commander of the Logistics Command, Air Force General Rafael Carrère, among others.

In addressing those present, the head of the U.S. mission emphasized that “the United States has been a historic and reliable partner of Chile, especially during this pandemic” and stressed that “the U.S. government, along our private sector, has provided millions of dollars in support to individuals, communities, research centers, and government agencies to overcome the challenges of these difficult times. Our close military and health collaboration are a clear demonstration of the friendship and cooperation between our countries.”

The transfer of the two C-130 Hercules was carried out in accordance with the provisions of the U.S. Foreign Assistance Act and is authorized by the U.S. Congress.  The delivery was made at no cost to Chile.

The first C-130 Hercules aircraft arrived in Santiago last April. These are tactical aircraft characterized by their use in a wide variety of operations, ranging from the transfer of troops and logistics equipment, helicopters and armed vehicles, to the support of aeromedical and firefighting missions.

As on the previous occasion on its transfer to Chile, the aircraft transported a donation sent by U.S. non-profit organization Project Hope to help address the Covid-19 pandemic.  The NGO sent a shipment of personal protection items, worth about US$ 32,000, which when added to the previous shipment totals US$ 175,000. The latter donation will go to the National Council for the Protection of the Elderly (CONAPRAN).

Project Hope is an organization that provides assistance to respond to various emergency situations worldwide through medical, educational and humanitarian aid programs and the new contribution was made possible through the good offices of U.S. Department of Defense personnel in the Office of Security Cooperation at the U.S. Embassy in Chile.

Since the onset of the pandemic, the United States has joined the efforts of all sectors, under the slogan #TodosEstadosUnidos, to help Chile respond to Covid. Detailed information on the support provided by the United States to Chile to date is available here.