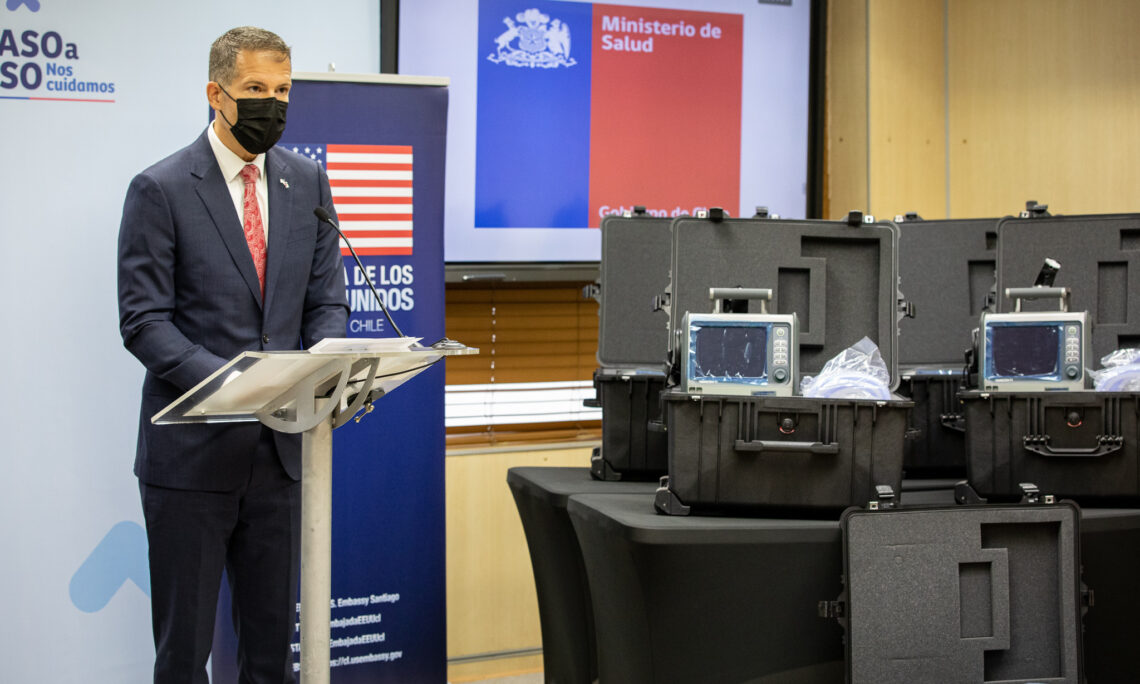 The United States, through the Humanitarian Assistance Program (HAP) of the United States Southern Command (USSOUTHCOM), donated to Chile eight Hamilton-T1 mechanical ventilators, for a total value of 133 thousand dollars, which will be destined to the Hanga Roa Hospital, in Rapa Nui; the Padre Hurtado Hospital in the commune of San Ramón; the Talagante Hospital, in the commune of the same name, and the SAMU (Emergency Medical Care Service) of the Metropolitan Region.

In a ceremony held in Santiago today, Chargé d’Affaires of the U.S. Embassy in Chile, Richard Glenn, presented the donation to the Minister of Health, Enrique Paris, and the Undersecretary of Healthcare Networks, Alberto Dougnac.

The head of the U.S. diplomatic mission emphasized that this delivery is part of the contributions made by the United States to Chile to support efforts against Covid-19.  To date, the U.S. government has donated approximately 1.8 million dollars to Chile through various humanitarian initiatives, ranging from the delivery of two field hospitals, masks, personal protection gear, hygiene and hygiene items.  This aid complements the significant contributions that numerous U.S. companies have made to support various vulnerable communities and which, as a whole, are part of the efforts united around the slogan “All America Helps Chile.”

The eight ventilators correspond to the Hamilton-T1 model, which is characterized by being an intelligent ventilation system for transport, whether in ambulances, helicopters or airplanes, and has a battery that allows it to operate for more than nine hours.  In addition, they have non-invasive ventilation with an integrated high-flow oxygen therapy, and can be used in adult, pediatric and neonatal patients.

This donation was made through the U.S. Southern Command’s assistance programs, which are intended to help in the response to natural disasters by providing funds for specific projects.

For more details and complete information about the assistance provided by “Todo Estados Unidos” to Chile to face the covid-19 pandemic, you can check this link.