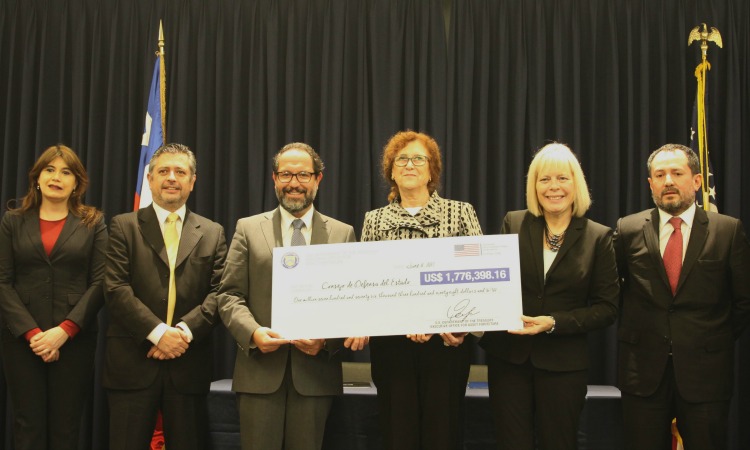 At a ceremony at the U.S. Embassy in Santiago, Ambassador Carol Perez announced the transfer of approximately $1.78 million dollars from the U.S. Department of the Treasury, Executive Office for Asset Forfeiture to the Chilean State Defense Council (Consejo de Defensa del Estado; CDE) This transfer marks the first time the U.S. government has shared seized assets with the Chilean government.

The announcement was made during a ceremony at the U.S. Embassy, which the President of the CDE, Maria Eugenia Manaud, and representatives from both countries attended.

In 2004, the U.S. Drug Enforcement Administration (DEA) began a joint investigation with the Chilean Investigative Police (Policia de Investigaciones; PDI) targeting a money laundering operation run by Mauricio Mazza which allegedly brought $60 million USD into the United States.  The PDI were the first to recognize Mauricio Mazza’s international movement of funds, and, in collaboration, with the CDE, monitored the flow of currency at the Santiago International Airport.

On March 30, 2007, Mauricio Mazza boarded a Santiago-Los Angeles, California flight in possession of $21,419.00 in U.S. currency and approximately $1,937,196.14 worth of various currencies.  He was arrested by the U.S. authorities upon landing and the money he was carrying was seized.

With the assistance of the PDI, the CDE, and state and local law enforcement agencies in the New York and Chicago metropolitan areas, the DEA and Internal Revenue Service – Criminal Investigations, conducted an investigation that resulted in the conviction of Mauricio Mazza on charges of money laundering in the United States.  In total, the joint investigation yielded over $3.5 million dollars in seizures.  The assistance and information provided to the United States by the Chilean authorities warranted a tier one equitable sharing, the highest tier, which awarded $1,776,398.16 to the CDE.

The U.S. government is pleased to enjoy strong law enforcement cooperation with Chile, which helps to protect the safety and well-being of both of our countries’ citizens.