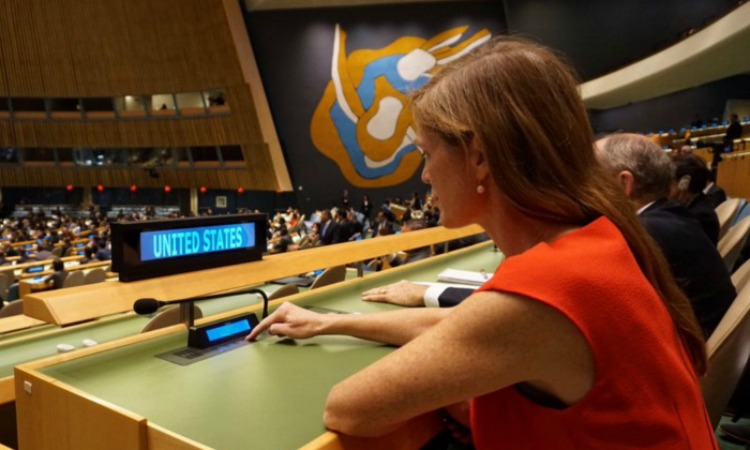 Thank you. Let me explain why. In December 2014, President Obama made clear his opposition to the embargo and called on our Congress to take action to lift it. Yet while the Obama Administration agrees that the U.S. embargo on Cuba should be lifted, I have to be clear, we don’t support the shift for the reason stated in this resolution. All actions of the United States with regard to Cuba have been and are fully in conformity with the UN Charter and international law, including applicable trade law and the customary law of the sea. We categorically reject the statements in the resolution that suggest otherwise.

But the resolution voted on today is a perfect example of why the U.S. policy of isolation toward Cuba was not working – or worse, how it was actually undermining the very goals it set out to achieve. Instead of isolating Cuba, as President Obama has repeatedly said, our policy isolated the United States. Including right here at the United Nations.

Under President Obama, we have adopted a new approach: rather than try to close off Cuba from the rest of the world, we want the world of opportunities and ideas open to the people of Cuba. After 50-plus years of pursuing the path of isolation, we have chosen to take the path of engagement. Because, as President Obama said in Havana, we recognize that the future of the island lies in the hands of the Cuban people, of course.

In the nearly two years since President Obama announced the shift in our approach, we have amended the regulations implementing the embargo six times – most recently on October 14 – finding ways to increase engagement between our governments and our people. We have re-established diplomatic relations with the Government of Cuba; re-opened embassies in our respective capitals; resumed regularly scheduled commercial flights between the U.S. and Cuba; facilitated people-to-people travel; eased restrictions on American businesses and entrepreneurs who want to do business in Cuba; and stopped limiting how often Cuban Americans can visit their families on the island. President Obama memorably became the first sitting U.S. President to visit Cuba since 1928; and, in a much more modest journey here in New York, I made the first visit by a U.S. Ambassador to the UN to Cuba’s mission to the United Nations since the Cuban revolution. Today, we add to that list the first-ever U.S. abstention on the UN General Assembly resolution calling for the embargo to be ended.

Abstaining on this resolution does not mean that the United States agrees with all of the policies and practices of the Cuban government. We do not. We are profoundly concerned by the serious human rights violations that the Cuban government continues to commit with impunity against its own people – including arbitrarily detaining those who criticize the government; threatening, intimidating, and, at times, physically assaulting citizens who take part in peaceful marches and meetings; and severely restricting the access that people on the island have to outside information.

As President Obama made clear when he traveled to Havana, we believe that the Cuban people – like all people – are entitled to basic human rights, such as the right to speak their minds without fear, and the right to assemble, organize, and protest peacefully. Not because these reflect a U.S.-centric conception of rights, but rather because they are universal human rights – enshrined in the UN Charter and in the Universal Declaration of Human Rights – which all of our 193 Member States are supposed to respect and defend. Rights that are essential for the dignity of men, women, and children regardless of where they live or what kind of government they have.

Let me be among the first to acknowledge – as our Cuban counterparts often point out – that the United States has work to do in fulfilling these rights for our own citizens. And we know that at times in our history, U.S. leaders and citizens used the pretext of promoting democracy and human rights in the region to justify actions that have left a deep legacy of mistrust. We recognize that our history, in which there is so much that makes us proud, also gives us ample reason to be humble.

We also recognize the areas in which the Cuban government has made significant progress in advancing the welfare of its people, from significantly reducing its child mortality rate, to ensuring that girls have the same access to primary and secondary school as boys.

But none of this should mean that we stay silent when the rights of Cuban people are violated, as Member States here at the United Nations have too often done. That is why the United States raised these concerns directly with the Cuban government during our historic dialogue on human rights in Havana on October 14, which shows that, while our governments continue to disagree on fundamental questions of human rights, we have found a way to discuss these issues in a respectful and reciprocal manner. We urge other Member States to speak up about these issues as well.

The United States believes that there is a great deal we can do together with Cuba to tackle global challenges. That includes here at the United Nations, where the decades-long enmity between our nations has at best been a distraction – and at worst, an obstacle – to carrying out some of the most important work of this institution and helping the world’s most vulnerable people.

Let me close by giving just one example – a very moving example. In 2014, we were confronted with the deadliest outbreak of Ebola in our planet’s history. The most dire projections estimated that more than a million people could be infected within a few months. Yet while experts made clear that the only way to stop the epidemic was to confront it at its source, the international community was slow to step up. Many were paralyzed.

It was in that context that President Obama decided to deploy more than 3,000 U.S. personnel to the epicenter of the outbreak, where they joined hundreds of Americans working for non-governmental organizations and humanitarian agencies in the hardest hit areas. President Obama also set about rallying other Member States to do their part. One of the very first countries to step forward was Cuba, which sent more than 200 health professionals to the region – an awe-inspiring contribution for a country of just 11 million people.

One of them was a 43-year-old Cuban doctor named Felix Sarria Baez, who was dispatched to an Ebola Treatment Unit in Sierra Leone. In the course of treating those infected, Dr. Baez came down with the symptoms of the virus – and he quickly went from being the doctor to being a patient. As his condition deteriorated, he was airlifted to Geneva, where, for two days, he drifted in and out of consciousness. He nearly died, yet miraculously he pulled through, and eventually returned to Havana, where he says he regained his strength by cradling his two-year-old son.

I’d like you to think, just for one moment, about what it took to save the life of Dr. Baez – a man who risked his life to save people from a country on the other side of the world. He was initially treated in the clinic where he worked, which had been built with the help of a U.S.-based NGO. From there, he was transported to a clinic run by doctors from the British ministry of defense. Then he was airlifted to Switzerland aboard a medical transport plan operated by an American charter service. Upon arriving at the hospital in Geneva, he was treated by Swiss doctors with a Canadian-developed experimental treatment.

Look at all the nations that played a part in saving the life of that brave doctor – a doctor who, after recuperating in Havana, actually chose to return to Sierra Leone, so that he could rejoin his colleagues in the field, saving the lives of Sierra Leoneans. Dr. Baez and all his colleagues belonged to Cuba’s Henry Reeve Contingent – which responds to international disasters and epidemics – and takes its name from a young American born in Brooklyn, who at the age of 19 traveled to the Cuba to join the country’s struggle for independence, and gave his life in 1876 fighting alongside Cubans for their freedom.

When Dr. Baez returned to Sierra Leone, he was asked why he had come back after all he had been through. He said, simply, “I needed to come back. Ebola is a challenge that I must fight to the finish here, to keep it from spreading to the rest of the world.”

That – what I’ve just described – is what the United Nations looks like, when it works. And noble efforts like these are precisely why the United States and Cuba must continue to find ways to engage, even as our differences persist. Today, we will take another small step to be able to do that. May there be many, many more – including, we hope, finally ending the U.S. embargo once and for all.