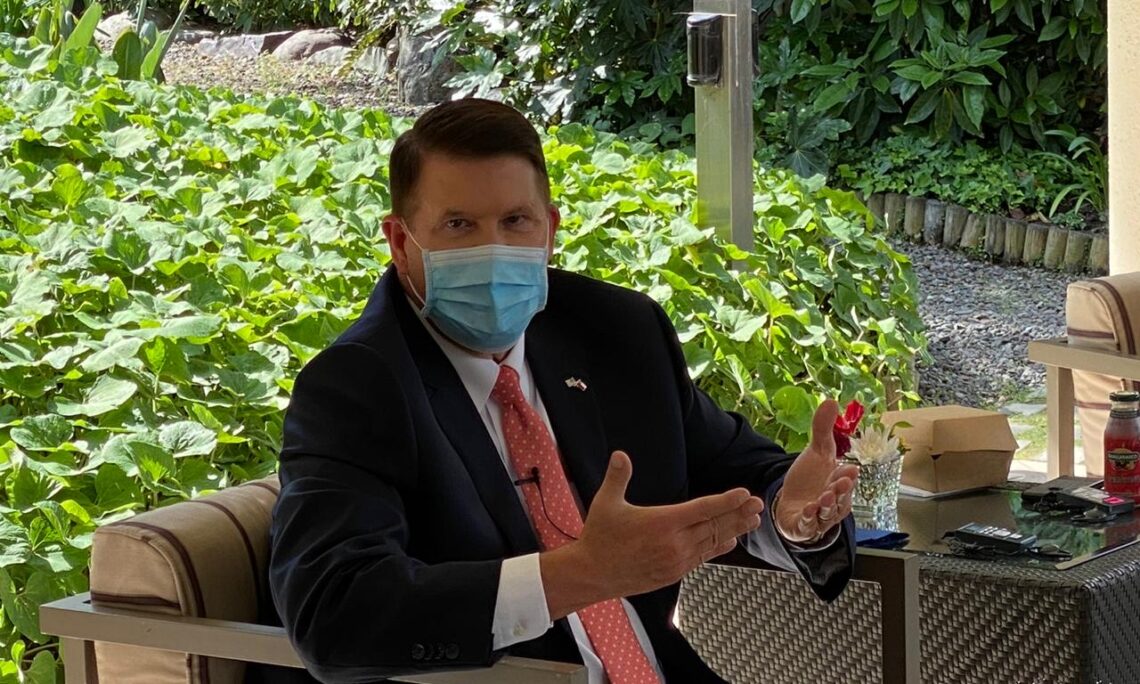 Opening Remarks to the media

Buenas tardes. It’s great to be here among friends in Chile. Your country is a great friend and trusted partner.

As you know, the partnership between the United States and Chile is grounded in our shared values and respect for democracy, economic opportunity, human rights, and the rule of law.

In my role of running economic diplomacy for the United States, I have come to learn this quality is not to be underestimated. We may not agree on every little detail, but we’re coming from a good place.

The United States has been, and continues to be, Chile’s most reliable partner of choice in: trade and investment—our bilateral trade has more than tripled and U.S. exports to Chile more than quadrupled since the signing of our Free Trade Agreement.

We have a strong partnership in science and innovation; people-to-people exchange through tourism, business, and education; and most recently in our response to the pandemic, with millions of dollars in assistance, including two field hospitals.

On a personal note, as a proud father of a daughter who’s a marine biologist and whose son works for NASA and helped design Mars Rover’s robotic arm, I’m proud that the United States has made significant investments in Chile in science, particularly in astronomy and Antarctic research.

The overall goal of my visit to Chile is to take the economic partnership between our countries to the next level, starting with the critical digital sector.

Secure 5G infrastructure is the strategic issue that crosses over, not just regional and national security policy areas, but all areas of economic partnership.

The Clean Network is a coalition of like-minded countries, companies, and civil society groups. It’s a comprehensive approach to addressing the long-term threats to data privacy, security, human rights, and trusted collaboration posed by authoritarian regimes.

The Clean Network represents the execution of a multi-year, enduring strategy rooted in internationally-accepted Digital Trust Standards, which form the basis of the EU 5G Clean Toolbox and the Clean Network.

Since Brazil joined the Clean Network a couple of days ago, there are now 50 like-minded Clean Countries, representing nearly 2/3 of the world’s GDP, 170 Clean Telcos, and many leading Clean Companies like Oracle, HP, Reliance Jio, NEC, Fujitsu, Cisco, SoftBank, VMware, and others.

Chile is an OECD Member State. 31 of 37 of its fellow OECD nations are already in the Clean Network. Chile can send a great message to companies looking for investment opportunities by becoming the 32nd.

Let me explain why this is so important to me personally. I come from the tech sector in the United States. After being a VP of GM, I spent about 30 years in Silicon Valley, building and leading successful technology companies like Ariba and DocuSign. Both of them $40 billion powerhouses.

I know from experience that the intellectual property and data our countries produce constitute the “raw wealth” of our modern technological economies—just like oil and steel were to the industrial economy, or land was to the agricultural economy. But I also know from experience that authoritarian powers—such as the Chinese Communist Party—are seeking to steal and coopt our data and intellectual property.

I know, because China did it to me. They stole my IP on multiple occasions.

Now that I am in the U.S. State Department, what I have seen is beyond imagination. I didn’t even know there was a National Security Law in China, which compels all Chinese citizens and companies to surrender personal data, proprietary technology, and intellectual property upon request to the Chinese Communist Party or the People’s Liberation Army, or suffer grave consequences.

Unlike other countries that use technology to build, trade, educate, and inspire, the CCP uses technology to assert and maintain social control over its citizens, and extend its Great Firewall beyond its borders.

I have now visited 20 countries in Europe, Middle East, and now Latin America. I’ve already had a number of meetings with government officials and business leaders here in Chile, including Vice Foreign Minister Valdivia and Vice Telecommunications Minister Gidi.

All of them would like Chile to become a central hub for investment and innovation. Joining the Clean Network would be an important step toward making that a reality.

There are many ways Chile can benefit from becoming part of the rapidly-growing Clean Network. It can help:

Listen to what some Chilean business leaders have said.

One Chilean insurance company executive said that secure 5G infrastructure was of critical importance to his industry. Protecting sensitive information is integral to maintaining customers’ trust.  Another executive in the banking sector said adapting the digital security standards of the Clean Network would be critical in deterring damaging security breaches.

In Brazil, where I just stopped before coming to Chile, business leaders agree.

Augusto Lins, President of Stone Pagamentos, said: “Having a 5G Clean Network is very important to fight cyber crime, data breaches, and money laundering, as well as to attract investments in new value-added products and services which will require innovative solutions.” He added, “A network is only as strong as its weakest link.”

Another executive from an American company said that joining the Clean Network would help turn an export market of 200 million consumers into 500 million.

An NEC executive who runs all Latin America operations said: “The Clean Network, with open radio access network architecture, will support a diversity of trusted vendors. This is good for economic growth, good for operators, and good for consumers.”

A Siemens executive said: “A Clean 5G Network is not just about cell phones; it is about critical manufacturing processes, oil and gas platforms, and power networks, sanitation systems and Internet of Things. The Clean Network will help ensure that critical infrastructure—power, transportation, and sanitation systems—is safe and reliable.”

That’s what the Clean Network is all about —TRUST. Trust is the most powerful word in any language. It’s the basis of every important relationship—you buy from people you trust, you partner with people you trust.

The United States and Chile trust each other. We trust Chile will make the right 5G decision for its citizens, businesses, and ultimately its national security. And the United States will be right there by your side.

Now, I’d be happy to take your questions.